The Department of Energy on Tuesday launched the next generation of its high-performance network for sharing data across its multi-billion-dollar research portfolio.

ESnet6 increases bandwidth to more than 46 terabits per second for processing, storing, visualizing, analyzing and sharing data from experiments, models and simulations between all of DOE’s national laboratories, tens of thousands of researchers, premier scientific instruments and supercomputing centers. It is the latest iteration of the Energy Science Network.

“As scientific instruments grow in complexity and supercomputers simulate scientific phenomena at higher resolutions, the science community is facing a growing challenge: data volumes that are increasing exponentially, coupled with the need to move, share and process this data globally and faster than ever before,” said Barbara Helland, associate director of the Office of Science’s Advanced Scientific Computing Research program, in the announcement. “With ESnet6, DOE researchers are equipped with the most sophisticated technology to help tackle the grand challenges we face today in areas like climate science, clean energy, semiconductor production, microelectronics, the discovery of quantum information science and more.”

ESnet6 launched ahead of schedule and boasts data transfers between 400 gigabits and a record 1 terabit per second, a new automation platform for customizing network services, a forthcoming application programming interface platform for scientists to request those services, high-precision telemetry to improve its performance, and improved cybersecurity.

Engineers developed the automation platform to handle current multi-petabyte dataflows and eventually support the exabyte data era by rapidly configuring new network paths for sharing massive datasets in under two minutes. ESnet already carried more than 1.1 exabytes of science data in 2021 in preparation for exascale computers like Frontier, which launched this year.

“ESnet6 is particularly important obviously in this stage as we enter this new era where we will regularly be producing exabytes of data that must be moved seamlessly between facilities, collaborators, laboratories no matter where they may be,” said Asefaw Berhe, director of the Office of Science, during the ESnet6 launch event at LBNL on Tuesday.

ESnet is already the exclusive network carrying data — 480 petabytes of it over the last decade — from the Large Hadron Collider in Geneva, Switzerland, to DOE’s experimental facilities. The world’s largest instrument is receiving upgrades expected to increase its data output 10 times over, and ESnet6 had to be prepared.

“It has the capability to do much more refined resource allocation and, I would say, the configuration of its resources to support unusual — either very high speed or certain timely — demands and the ability to adapt quickly at need,” Cerf said.

“ESnet6 represents a transformational change in the way networks are built for research with improved capacity, resiliency and flexibility,” said Inder Monga, executive director of ESnet, in a statement. “Together, these new capabilities make it faster, easier and more efficient for scientists around the world to conduct and collaborate on ground-breaking research.” 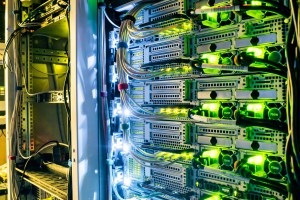