The Army’s new head of acquisition, technology and logistics says to get more software in the hands of soldiers, the service needs to start using authorities recently granted to the military for enhanced flexibility in buying software.

Douglas Bush, who was sworn into the top Army acquisition job Feb. 11, said that increasing the speed and agility of how the Army buys software is a top priority. Achieving that will depend heavily on using recent authorities granted by Congress, including one that allows the Army to pilot a new way to purchase software outside of standard acquisitions practices.

“I believe we have the authorities we need — it’s a question of using them well,” Bush said Thursday during a call with reporters.

Bush said the main issue when buying software is the lack of flexibility in the way the Army is allowed to spend money. Traditionally, the Army is authorized to use specific types of funding — also known as a “color of money” — for certain types of programs, like research and development or production procurement.

The rigidity in that construction often slows down programs that cut across those areas, especially software-based tech, Bush added.

“I don’t believe the private sector distinguishes between [research and development] and the procurement of software, but we do,” he said. “Does that make sense anymore? I’m not so sure.”

Congress allowed the Pentagon and military services to test a new budget activity specifically for software called Budget Activity 8 in the fiscal 2021 National Defense Authorization Act. That’s a new lever Bush says he wants to pull, and he hinted that he hopes the flexibility it offers might increase.

“The funding might have to be more flexible,” he said.

Bush used to work in Congress, most recently as a senior staff member of the House Armed Services Committee. He stressed that he plans to include Congress in key decisions he makes and will consult with members closely on budgetary matters. His plan for boosting software acquisition agility has yet to be finalized, he said.

“I can’t say I’ve got a master plan, but I want to develop a plan … to get us better than we are,” he said. 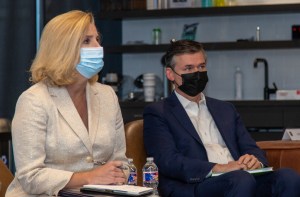