The software and data platform that serves as a central nervous system of the F-35 is working a little better than it was five years ago — but overall it’s still falling short of the goal of providing timely and accurate information on the maintenance and operations of the fighter jet to pilots and other personnel, according to a new watchdog report.

Over the 66-year expected life cycle of the F-35 weapons system, it will cost the Department of Defense roughly $1.2 trillion. ALIS plays a central role in providing the “IT backbone and capabilities to support current and future Warfighters across the U.S. and allied military services,” according to information from contractor Lockheed Martin. “ALIS integrates a broad range of capabilities including operations, maintenance, prognostics, supply chain, customer support services, training and technical data. A single, secure information environment provides users with up-to-date information on any of these areas using web-enabled applications on a distributed network.”

Thus, without a fully, properly functioning ALIS, the F-35 loses its advertised edge as a modern, intelligent fighter jet capable of making data-driven decisions at all stages of use. Per the GAO, the faulty system is “affecting the overall readiness of the F-35 fleet.”

Some things are getting better

GAO has been watching the development of the F-35 and ALIS for more than five years. And in that time, it explains, things have improved as the DOD and Lockheed look to largely redesign the system.

“According to pilots, maintainers, supply personnel, and contractors at 5 U.S. F-35 locations, ALIS is generally performing better than it was 5 years ago,” says the new report. “Specifically, users at all 5 locations stated that data processing, downloading of information, and screen navigation were generally faster than previous years.”

For instance, software updates to correct minor bugs have made improvements to the overall system, according to some users. The F-35 program office says it is delivering more regular “service pack” updates “focused on improving user interface-related flaws that were discovered during major releases” and preventing users from “having to wait, in most cases, over a year for a major ALIS software release.”

On top of that, “some users also reported minor functionality improvements within certain ALIS applications, such as the Computerized Maintenance Management System, leading to reduced time required to perform actions within those applications,” the report says.

Despite the improvements made in recent years, F-35 users are still plagued with issues, they told the GAO. “Many of the challenges…are similar to those we reported in April 2016, including deployability, inefficient issue resolution process, and data inaccuracies.”

Data integrity and accuracy continues to be the foremost issue across the board. For instance, “users at all 5 of the locations we visited told us that electronic records [on parts maintenance] are frequently incorrect, corrupt, or missing, resulting in ALIS signaling that the aircraft should be grounded, often in cases where maintainers know that the parts have been correctly installed and are safe for flight,” the report says.

Because of this, “users at all 5 F-35 locations we visited have been collecting and tracking information outside of the system that should be automatically captured in ALIS,” which is both cumbersome and introduces risks to operations, GAO said.

There are also deployment issues. ALIS hardware is “bulky, can be cumbersome to transport, and, when necessary, difficult to store on a ship,” users told the GAO. Due to the heft of the hardware pieces, “squadrons will not always take them on deployments. In these instances, internet connectivity is important to access critical aircraft data from the forward location and send it back to the squadron’s [hardware] for processing. However, internet connectivity can be slow or non-existent at these locations.”

Meanwhile, issues with a shortage of trained personnel, the process for resolving defects, user experience and immature applications were also brought up in GAO’s interviews with users.

A big reason these issues persist? GAO believes it’s because the department, despite its commitment to redesign ALIS, has failed to set a strategy for that and determine how it will measure the success of those efforts.

“While DOD and the prime contractor have established various initiatives to re-design ALIS, DOD has not developed a strategy for the future of ALIS that clearly identifies and assesses goals, key risks or uncertainties, and associated costs,” GAO says. “For example, as discussed previously, DOD lacks clarity about the goals of the re-design, such as the capabilities that will be included in the future system and the extent to which ALIS will be hosted in the cloud.”

The GAO recommended that DOD develop such a strategy and process for “measuring, collecting, and tracking information on how ALIS is affecting the performance of the F-35 fleet to include, but not be limited to, its effects on mission capability rates.” DOD concurred with the recommendations, saying it is already taking action on both items, to include developing a strategy to replace ALIS with what it calls the Operational Data Integrated Network, or ODIN. 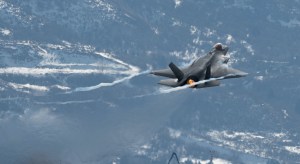