Simply talking about the shift, however, doesn’t answer the more difficult question of how culture changes.

That’s precisely what an attendee at Data Foundation’s Data Transparency 2017 event asked Tuesday during a panel manned by digital government leaders such as the Office of Management and Budget’s Kristen Honey, login.gov leader Joel Minton and more.

When it comes to culture change, the attendee asked, how do you encourage federal leaders to learn new things? To look past known technologies and established habits for answers?

“It’s an ongoing issue,” Honey admitted, “and I think tenacity and grit are very important.”

Clara Tsao, a Presidential Innovation Fellow on the panel, echoed the importance of those two qualities.

In her work with data.gov, Honey said, her team has seen success by simply bringing leaders to events where civil society is engaging with the open data and introducing them to what that looks like in practice.

“Just bring people to a hackathon data jam and just show them,” she said.

Honey brought up the example of the National Day of Civic Hacking, this past Saturday, where “it was some eighth graders who really knocked it out of the park on the pitches” presenting their work on Lyme disease prevention.

Seeing the potential presented by open data in this forum made a “big impression” on the government leadership present, she said.

Can this method of culture change scale? On this question the panel was less emphatic — maybe the process is inherently high-touch. “It takes time,” Honey admitted. 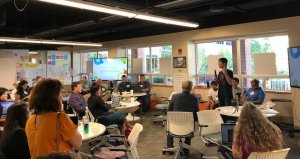 How does federal IT culture really get changed? It’s a high-touch process, digital gov leaders say