Amid the federal government’s technological transformation, agency leaders are also looking to upgrade the roles of their acquisition and technology officials to match the roiling transformation of their IT infrastructures.

Officials from the Office of Management and Budget, Department of Commerce and Department of Energy outlined ongoing plans Tuesday to enhance the skill sets of IT, acquisition and project management professionals to include a better blend of technology and business knowledge.

“One of my favorite people is Luke McCormack, who was the former CIO of [the Department of Homeland Security] because he was one of the few IT types that understood acquisition,” Joanie Newhart, the Office of Federal Procurement Policy’s associate administrator for acquisition workforce programs, said at the Project Management Institute’s PMO Symposium Tuesday,

Following the workforce, technology and data management change mandates outlined in the President’s Management Agenda, agency leaders are reconnoitering how those roles can better address modernized mission approaches, even if that means shaking up some job duties and even the jobs themselves.

In addition to taking a broader view at what roles IT specialists need to play in agencies that will soon rely on emerging technologies, agency leaders are also looking at what that bench of talent looks like, including whether existing job roles serve the PMA’s cross-functional goals of workforce, technology and data management reform, said Laura Furgione, chief of the Census Bureau’s Office of Strategic Planning, Innovation and Collaboration.

“Do we still need math statisticians? What kind of employees do we need to actually look at the data and [exploit it] for multiple uses,” she said. “That’s where we are going with our succession plan as well, to ensure that we have the right people in the right places, and also, in sharing that when new technologies come along, that they actually have the training and development they need to actually use those technologies to their fullest potential.”

The moves come at a time when there’s pressure on agencies to run more efficient, on-budget acquisitions, something that requires procurement officials to adopt and blend skill sets in what has been considered a rigid human capital system.

But while the expertise of IT and acquisition officials could be melding, the role of program management officer will soon be more defined

Following the near two-year anniversary of the Project Management Improvement Accountability Act becoming law, Newhart said OMB is working on defining exactly what a program manager is.

The PMIA aimed to establish program management standards across the government to help PMOs shepherd large-scale agency acquisition projects to completion without cost overruns and the potential for mismanagement.

But Newhart said that while some agencies have embraced installing PMOs into their project development processes for years, others have not. So OMB is working with the Office of Personnel Management to “identify” the PMOs and help provide agencies with guidance to help build that pool of talent.

Newhart said she envisions that pipeline being built on a mix of agency-specific training resources and past program management successes, plus an enterprisewide learning program within the Federal Acquisition Institute. It will also be built through a partnership with a grassroots group called the Federal Program and Project Management (FedPM) community of practice to help train new PMOs on best practices.

Because agencies are being asked to both embrace more innovation and risk to help modernize the IT systems that will deliver on mission, Linda Ott, division chief for professional development in the Department of Energy’s Office of Project Management, said the shift in personnel practices will require federal employees to think more about how they handle their acquisitions.

“It is more like a business-minded [gear] than it is [saying], ‘I’m a bureaucrat in the federal government.’ It’s a big shift,” she said. “I think OMB’s advancements, especially all the way through PMIA, is a testament to that, that we’re asking government employees to be business leaders.” 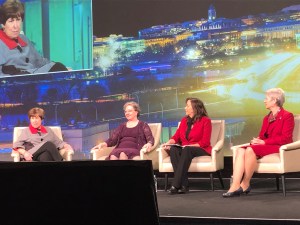 In filling IT acquisition jobs, agency leaders want a new kind of hybrid