Monday, the Federal CIO Council held day one of its inaugural federal tech and cyber hiring and recruitment event at the Silver Spring Civic Building near D.C. There, representatives from more than 30 federal agencies chatted with and accepted resumes from the first wave of the 2,500 event registrants — by 1 p.m. 1,200 had cleared check in, acting U.S. CIO Margie Graves said.

“As citizens expect better services and as cybersecurity threats increase, we know that we have the imperative to modernize,” Graves said during a press conference. “And to do that, of course, we need engineers, data scientists, developers, cyber specialists, executives in this realm, and we need them at the helm of the federal government.”

Graves told gathered reporters that event attendees are coming from across the country — with 40 different states represented. She said organizers hope the event will entice top talent, perhaps even some erstwhile private sector employees lured by mission. “There’s truly no greater feeling than being able to impact the lives of American citizens,” Graves said.

Out on the expo hall floor, attendees’ driving motivations seemed to be less aspirational and more practical. Sam Apa, who will graduate in May with a degree in informatics, told FedScoop he wants a job in the federal government because his mom is a public servant and she recommended it. “The best of the best work there,” he said, noting that he’s be most interested in a job with the CIA or National Security Agency.

Another attendee, who asked to be identified only as Karen, already works at a federal agency but said she has found “no promotion potential” in her current role. So she showed up at the Civic Building at 10:30 a.m. Monday and waited in a line for an hour just to see what other opportunities could be available to her.

While organizers advertised that there are 500 openings agencies are looking to fill over the course of this event, these jobs are far from evenly distributed. Not all agencies present are in a position to make near-term offers, despite how much they might need the help.

Over at the U.S. Agency for International Development table, representatives were collecting resumes but had little else to offer. The agency is under a hiring freeze, a representative explained, and yes, it’s a little frustrating. USAID hopes to be granted special authority to hire for cyber roles in the coming months though, he said, so being present at the event isn’t a waste of time. Seeing resumes come in “gives us a sense of what the market is like,” he said.

The Department of Health and Human Services, by contrast, had rented space in a nearby hotel Monday to conduct interviews for the “hundreds” of IT and cyber roles the agency has available. HHS CIO Beth Killoran told reporters during the press conference that the agency had already made some initial hiring offers. How quickly this translates from initial offers to employees in seats can run the gamut though, she added. Depending on what kind of clearance is needed, and whether or not the person in question has worked in the federal government before, the background check that precedes any final offer can take days to weeks.

“Obviously we’d like to have some of those positions in their seats before Christmas,” Killoran said. “It could be my early Christmas present.”

Not all attendees, it seemed, were clear on exactly which agencies would be hiring, which agencies would be interviewing and which would simply be present. For attendee MD, his lack of clarity on who exactly was hiring and for what roles was a source of frustration. He expected more interviews, he said. “This is a waste of time for me,” he said, gesturing at the USAJobs.gov flyers on one table. “I can get all this on the internet.”

At the Food and Drug Administraiton table, Raymond Simmons told FedScoop that the FDA is not one of HHS’ offices doing direct hiring at the event. Still, he sees value in the hiring fair exercise, even when it doesn’t lead to a direct job offer.

Exactly what this value translates into is something the Federal CIO Council and partners at the offices of Management and Budget and Personnel Management will be assessing once it all wraps up Tuesday.

Graves said the organizers will look for return on investment measured as the number of actual hires that come out of the event, agency feedback and more when deciding whether to expand this exercise beyond the pilot phase.

A detailed follow-up report will be compiled and made available, Graves said, though it is not yet clear when this will be. 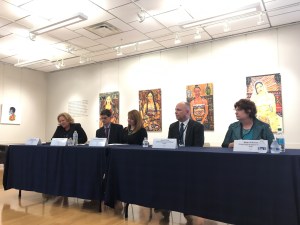