After months of adjusting to an era of mass telework, agency officials say they are still wrapping their heads around some of the lessons from that process — and not just the stumbling blocks, but also the successes.

Greg Crabb, the chief information security officer for the U.S. Postal Service, says the pandemic has given him fresh perspective on what he calls the “four Cs” of innovation: compete, collaborate, control and create. The competition, this time, was about staying ahead of cybersecurity threats, not necessarily competing with other businesses, he says. Collaboration lessons were direct, too: The USPS had to rethink its relationships with other supply chain companies like Amazon and FedEx.

The lessons in the “control” and “create” areas were tied directly to the workforce, Crabb says.

“We moved literally tens of thousands of employees off the workroom floor, into their homes in order to be able to support the frontline workers,” Crabb said Wednesday during IBM‘s ThinkGov digital event, produced by FedScoop. “And for those frontline workers we had to create new ways of interacting,” and the net result is that Americans didn’t really see any drop-off in service.

NASA Chief Human Capital Officer Jane Datta says the coronavirus shutdowns caused the space agency to reconsider what kinds of people it needs for jobs, and where they do those jobs.

“We are really going to leverage what we’ve learned over these last months, in remote work,” Datta said during the IBM event. “Because the more you can have flexibility on geography, and people working from where they are, the greater access to talent we have … as well as plugging people we already have working for NASA into work, wherever that work might be.”

The Postal Service made a few early decisions that spotlighted tech talent as the organization shifted to mass telework, Crabb said. One was creating a “COVID command” for the entire agency, with the CIO Kristin Seaver in charge. Within his own group of about 600 cybersecurity workers, Crabb said he formed a “tiger team” to focus on information security.

“I put some of my up-and-comers on that team, so that they could shine,” he said. “That’s extremely important: finding somebody that can really handle a situation under pressure.”

Going forward, organizations will need to define the “new normal,” Crabb said. Every company will have to decide if it still needs employees working side-by-side.

“We’ve learned a lot of lessons” at the Postal Service, he said. “And the first lesson is that we need to keep our employees safe.” 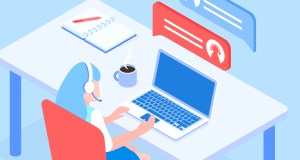