As the first female director of the Defense Information System Agency, Vice Adm. Nancy Norton recognizes the importance of diversity in the technology workforce. But diversity doesn’t just happen on its own, she said — it must be actively demanded and embraced from the top down.

It is not enough just to bring together people of different backgrounds, call it diversity and expect it to make any difference, she explained at an AFCEA luncheon focused on women in the Defense Department. Norton took command of DISA and the Joint Force Headquarters Department of Defense Information Network Feb. 1.

“We really do need to not just be a diverse workforce but we need to demand that that diversity of opinion and diversity of perspective is actually listened to,” Norton said. “Having a diverse group of people in the room that aren’t enabled to actually say anything or contribute to the dialogue isn’t real diversity. We have to encourage them to speak up and talk about different kinds of perspectives, different choices than what you would necessarily have. That’s something we as leaders not just have to encourage but we also have to demand it.”

As a leader, Norton said it is her job to seek out perspectives unlike her own.

“We have to actually ask for the opinion of the people who have a different background … deliberately, not expecting them always to stand up and be bold and say things that are different in an audience where they may not feel empowered,” she said.

Norton gave a variety of advice to the mostly female crowd, such as the importance of mentorship and how to develop a career in a workforce typically dominated by men.

She likened her career in the Navy to hiking a tall mountain, something she enjoys doing in her free time.

But really, when hiking, she said, most of what you’re doing is “focusing on your footsteps in front of you.”

“I want to make sure that at every one of those junctions, I’m prepared for that steepness and that toughness of the that terrain of that hike,” Norton said. “But I also like to think about that at some point, you have to stop, pause and reflect back on ‘What have I won? What have I seen on that path?And Where am I going to go next as I continue to traverse up that path?'”

She’s been successful by taking things one step at a time, thinking about what she wanted to accomplish “not necessarily for the rest of my life, but for the next section of the trail that’s ahead of me. Am I prepared for that and is this really what I want to do?”

“And ultimately, that will lead you to the top of the mountain,” Norton said.

Next week, FedScoop will release it’s 2018 Top Women in Tech list, honoring female leaders in the federal IT community like Norton. 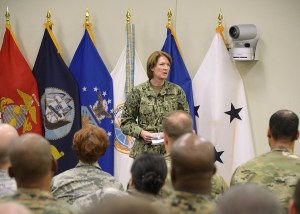