Army Secretary Ryan McCarthy isn’t ready to invest in the hype around artificial intelligence just yet. Rather, he’s set the Army’s focus for the next two years on acquiring the cloud architecture that can serve as the foundation for AI in the future.

Expect to see more action and discussion around cloud than on AI in the Army “because you’ve got to put the horse in front of the cart in order to pull it,” McCarthy said Thursday at an AEI event.

“Cloud has to happen to maximize AI,” he said. “There’s a lot of energy in AI and everybody’s going to conferences and they’re reading books and talking about it. But if you talk to the people in the financial industry who basically did it first, the online trading with writing in an algorithm that helps you make a decision on whether to buy a barrel of oil or not — that’s from cloud architecture. We have to put that in place, and then those AI type of algorithms that we’ll put into long-range fires and everything else, that’ll be maximized.”

The Army is heavily investing in this move to the cloud, “north of $700 million” in future years spending projections, as McCarthy has said before. “That’s largely to inventory all of our data, get the software development support so that we can get all of the data across the Army under the right standards and formats, and then to make that transition or migration to a cloud architecture,” he said Thursday. “So a lot of this is infrastructure build over the next 24 months.”

The Army’s investment is parallel to but separate from the Department of Defense’s larger commercial cloud acquisition through the Joint Enterprise Defense Infrastructure (JEDI) contract, which it recently awarded to Microsoft for a potential $10 billion over 10 years. McCarthy seemed to suggest that as the Army proceeds with its cloud developments it will select its own provider for that infrastructure.

Ultimately, such a move — first to the cloud and then to AI — is about speeding up battlefield decisionmaking, McCarthy said. “So much of combat is speed of decisionmaking.  And if you can have a machine crunch the data and pass it from a sensor node to…whatever the weapon system of choice is, to be able to queue it in a second. Today it takes minutes. In a firefight, that is eternity.”

“The cloud architecture truly maximizes the artificial intelligence-like capabilities, because it’s all about the … format of the data and the speed at which you can move it,” he said

But that’s also where things begin to cross over into uncharted philosophical territories — bringing machines into decisions of life and death, especially as they become more “intelligent.” As many before him have emphasized, McCarthy said it’s imperative to keep a human in the decisionmaking loop.

“A system can crunch the data very quickly and give you an answer, but it doesn’t have context,” he said. “Only a human being can bring the context to a decision. And that’s where, as we proceed and this technology gets more and more mature and it gets fed into a weapons system, those are very challenging times ahead of us.” But for now, McCarthy said, “America’s not ready for this.”

At a department level, the DOD’s Joint AI Center and Defense Innovation Board are exploring the ethics behind this sort of AI and leading the way with work that the Army can take advantage of when it’s ready for AI.

McCarthy did, however, have encouraging words for America as a nation in the global race for AI superiority. While many point to China as the frontrunner in AI development and adoption, he said the Chinese are disadvantaged because “the Communist system doesn’t incentivize you to innovate.” Rather, China will “have to send all their kids here because we’ve got all the brainpower. All the innovation is in America.”

“So the good thing is their whole philosophy and way of life will inhibit their success,” McCarthy said. “They’re going to have to muscle their way through it and steal from us, which they do.” 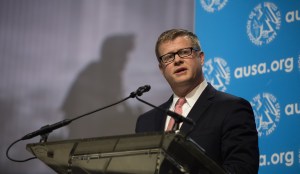