The report examines the development of the Army Futures Command, the service’s initiative to modernize its weapons and equipment systems which is scheduled to be fully operational in July.

The Army stood up Futures Command in 2017 to help streamline its acquisition process for various systems after past programs failed and cost billions to cancel. The report notes that potential missteps in establishing the command could repeat those failures.

The plan requires a large institutional shift of resources, but auditors found that the command had yet to fully formalize how it will operate, despite its goal of being operational by this summer.

“Army Futures Command has not yet established policies and procedures detailing how it will execute its assigned mission, roles and responsibilities,” the report says. “For example, we found that it is not yet clear how Army Futures Command will coordinate its responsibilities with existing acquisition organizations within the Army that do not directly report to it.”

The Army began taking steps to help mitigate those concerns in August 2018 with a series of policy changes and plans to issue additional policies and procedures this year.

Army Futures Command also plans on using a series of cross-functional teams to better design the pilot programs that determine the acquisition requirements for future weapons systems, trimming the current requirements timeline from an estimated three-to-five-year duration down to one year.

GAO auditors said they are also concerned the Army plans to mature potential technologies more quickly than the leading practices recommend, which could potentially repeat the cost overruns and project delays seen in past weapons system programs.

“Specifically, we found that the Army’s October 2017 science and technology review identified a goal of demonstrating new technologies in a relevant environment, such as a highly realistic laboratory setting, before transitioning them to specific platforms or programs,” the report said. “Under leading practices that we identified, prototypes should be demonstrated in an operational or realistic environment—not simply in a relevant environment—prior to starting system development to ensure that they work as intended for the end-user.”

The report also noted that Army Futures Command has yet to establish a formal structure to capture and share the best practices and lessons learned in its cross-functional teams for future projects.

“If the Army fails to institutionalize these lessons learned in the new command, it risks losing the benefits from the experiences of these pilots thereby either repeating past mistakes or failing to benefit from past practices that worked well,” the auditors said.

Department of Defense officials concurred with all four recommendations. 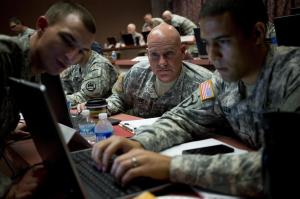