Multiple applicants expect to have fully operational health information networks for securely sharing clinical data within a year of receiving approval, according to National Coordinator for Health IT Micky Tripathi.

A couple networks are live, and the Office of the National Coordinator for Health IT hopes the first group — among 12 entities that submitted letters of intent — will be officially designated qualified health information networks (QHINs) in early 2023.

Part of the Department of Health and Human Services, ONC published a framework in January for exchanging health information nationwide: the Trusted Exchange Framework and Common Agreement (TEFCA). Required by the 21st Century Cures Act, the framework provides non-binding principles and the agreement technical terms, and now it falls to ONC’s recognized coordinating entity, The Sequoia Project, to approve interoperable QHINs.

“What we’ve heard informally from a number of the prospective QHINs is that they are building in anticipation of getting approved,” Tripathi said, during eHealth Exchange’s annual meeting on Dec. 15. “They think that they would have a pretty good opportunity to do this in the 12-month window and hopefully shorter than that with some of them.”

QHINs will be added on a rolling basis to include electronic health record (EHR) vendors, ambulatory practices, hospitals, health centers, federal and public health agencies, and payers. Epic Systems became the first EHR vendor to announce it would seek QHIN status in August and was later joined by the likes of the eHealth Exchange network and trade association CommonWell Health Alliance.

How TEFCA coexists with other exchanges when it comes to benefits determinations, health care operations, treatment, payment and individual access remains to be seen. But scaling TEFCA will be the “real challenge” and one for which incorporating the Health Level Seven (HL7) Fast Healthcare Interoperability Resource (FHIR) data standard will be key, Tripathi said.

By the end of 2022, certified EHR vendors must make a FHIR API available to customers.

“But it’s done via spreadsheets,” Tripathi told FedScoop in July. “A lot of manual work is still done to populate that now.”

The government has spent about $40 billion on EHR infrastructure since the passage of the Health IT for Economic and Clinical Health (HITECH) Act in 2009. Yet clinical operations and health payment systems remain largely rooted in paper because states — most of which still don’t require electronic case reporting — have health authority in the U.S.

Jurisdictional issues and scarce resources are some reasons why about 30% of U.S. hospitals still don’t connect to a health information network, Tripathi said Dec. 15.

Naturally issues with case reports, lab and testing results, and vital records arose early in the pandemic, when they were often being shared by phone or fax.

For all these reasons the Centers for Disease Control and Prevention launched its Data Modernization Initiative (DMI) in 2020 to streamline sharing of electronic health information between care providers and state, local, tribal and territorial (SLTT) health departments.

Data standardization is key to improving information sharing between these systems, which is why ONC is working closely with the CDC on its North Star Architecture. The U.S. Core Data for Interoperability (USCDI) Version 4 (v4) that ONC has planned for 2023 will become the de facto minimum set of health data classes and elements for nationwide, interoperable information exchange.

At the same time ONC is developing USCDI+, a nationwide public health data model, for release beyond 2023. Discussions with the CDC and Centers for Medicare and Medicaid Services revealed more than 20 data elements that overlapped, allowing the agencies to agree on a common approach.

ONC is now speaking with the White House Office of Science and Technology Policy and the National Institutes of Health about tailoring a USCDI+ program for President Biden’s Cancer Moonshot program.

EHR vendors support TEFCA and the DMI because they’ll be able to maintain just one customer interface, rather than hundreds to meet the various jurisdictional requirements of SLTT health departments, Tripathi said in July.

Phase I of the DMI is also improving the CDC’s situational awareness, which is based on the Data Collation and Integration for Public Health Event Response (DCIPHER) platform — originally intended to track food-borne diseases. DCIPHER gave rise to HHS Protect and has since had hospital capacity, social vulnerability, mobility, race and ethnicity, social determinants of health, economic, two-on-one, and climate data layered atop it as part of the new Center for Forecasting and Outbreak Analytics’ work, Dr. Dan Jernigan, deputy director for public health science and surveillance, told FedScoop in August.

The center can already do weekly influenza and some Mpox forecasting and has visibility into emerging problems at about 70% of emergency departments.

“To see a fully formed prediction center, it’s going to be a couple years,” Jernigan said. “The numbers of staff that are in the Center for Forecasting right now are in the tens to thirties, but it is anticipated to be a much larger group.”

As part of DMI Phase I, 128 reportable diseases now automatically trigger EHR electronic case reporting, which is routed to the Association of Public Health Laboratories-APHL Informatics Messaging Services (APHL-AIMS) cloud platform and then SLTT health departments. Electronic case reporting increased from 187 facilities pre-pandemic to more than 14,000, more than 30 of which turned on Monkeypox reporting.

While the effort highlights the CDC’s move toward pathogen- and program-agnostic systems through its DMI, electronic case reporting continues to fall short.

“It’s not nearly the volume that we need it to be,” Tripathi said in July. “But at least we’re starting to set up those pathways.”

At the same time the DMI has seen “dramatic improvements” in COVID-19 reporting across immunization information systems (IISs), he added.

Cloud migration allows doctors like Phil Huang, director of Dallas Health and Human Services, to match immunization, lab and death records to know if a patient who passed away tested positive for COVID-19 and was vaccinated.

“That ability to put that data together and integrate it with other kinds of information, even down to the neighborhood level, helps him do his prevention work and his mitigation work in a much more targeted way,” Jernigan.

CDC proposed the DMI receive about $200 million in fiscal 2023 to continue its “incremental” progress, but the Healthcare Information and Management Systems Society estimated the initiative needs $33 billion over the next 10 years to be successful, he added.

Meanwhile ONC, unable to enforce TEFCA, is working with federal partners to highlight the need for network-to-network interoperability and hoping its rollout leads outside providers to question why they’re still faxing records.

“We were given no dollars and no new authorities to do this,” Tripathi said. 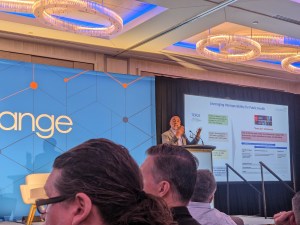