One of the Pentagon’s main IT purchasers, the Defense Information Systems Agency, says it wants to copy the practices of a smaller, more nimble military office when it comes to rapidly funding new capabilities from industry.

That startup — known as Defense Innovation Unit Experimental, or DIUx — is able to quickly make agreements with companies using what are called Other Transaction Agreements, and DISA wants to begin doing the same, said the director of the agency’s Cyber Directorate, John Hickey, on Wednesday at the AFCEA Washington, D.C. Mobile Tech Summit.

OTAs are attractive to smaller companies that usually do not contract with the Defense Department because parts of the deals are negotiable (like intellectual property rights) and the time to an award is much faster than the traditional contracting process, said DIUx Managing Director Raj Shah in October 2016.

When asked Wednesday how to make sure newly acquired capabilities are still relevant after a lengthy application process, Hickey said “we’ve got to look at other ways of doing that.” And one approach is using an OTA, he said.

DIUx awarded 12 of those agreements totaling $36.3 million in the fourth quarter of fiscal year 2016, through its rapid contracting tool the Commercial Solutions Opening.

Of DISA’s use of OTAs, Hickey said, “We don’t have that capability today so we have to go through a second party, if you will.”

Shah said last year that the Commercial Solutions Opening “is a reliable and transparent process where a company can quickly understand if their proposed solution is valuable to the department or not, and then what those next steps are.”

What may be the most important, Shah said, is that “upon success of a prototype, the CSO allows quick transition, or transition into procurement contracts.”

The agreements aren’t procurement contracts, grants or cooperative agreements, but they are legally binding contractual instruments, according to DIUx, “used specifically for prototype projects directly related to enhancing mission effectiveness of military personnel and the supporting platforms, systems, components, or materials proposed to be acquired or developed or for the improvement of platforms, systems, components, or materials in use by the armed forces.”

Cybersecurity as a service?

When it comes to improving the time it takes to acquire new capabilities, Hickey also said the agency in some of its computer centers successfully used capacity-service type contracts.

“So in the area of cybersecurity could you get it as a managed service and buy it as an integrated package?” Hickey said as an example. “When I was out at [the RSA cybersecurity conference], specifically on the cybersecurity side, that was what I was looking for.”

He added: “I’m looking for industry to partner together and come up with the capabilities that we’re looking at. And that’s a lot easier to contract for, and also change out equipment when you’re potentially only leasing the equipment.” 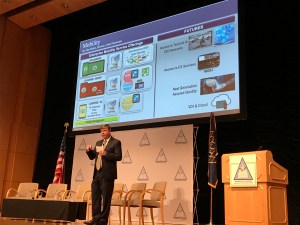