A shakeup could be coming soon in the way the Pentagon manages its Joint All-Domain Command and Control efforts, FedScoop has learned.

The Joint All-Domain Command and Control initiative aims to better connect the U.S. military’s many sensors, shooters and networks across land, air, sea, space, cyberspace and the electromagnetic spectrum — and ultimately enable battlefield commanders to make better data-driven decisions faster. However, each of the military departments has its own responsibilities under the overarching concept. For the Army it’s Project Convergence, for the Navy and Marine Corps it’s Project Overmatch, and for the Air and Space Forces it’s the Advanced Battle Management System (ABMS).

The Pentagon’s top leadership isn’t satisfied with where things stand now, and they see the need to drive more alignment and coordination between DOD components.

In a meeting with FedScoop and other reporters on Thursday during a multi-state trip focused on new defense-related technology, Hicks acknowledged that each of the military services are paving the way for JADC2 in notable ways individually — but added that there’s a palpable lack of coordination at the enterprise-wide level that must be addressed in the near term.

“Neither the secretary nor I are satisfied with the — where we are in the department on advanced command and control,” she said. “Every day in the department you can find examples where the speed and quality of decision-making [at the] tactical level, operational level, up at the strategic level, can be vastly improved and create that edge that we need for the future. A lot of good work going on throughout the department [but] what I’m really focused on right now is taking that … good work that’s going on and scaling it to the enterprise level.”

Hicks’ comments follow concerns raised by other senior Pentagon officials about shortcomings in JADC2 coordination across the services.

Doug Bush, assistant secretary of the Army for acquisition, logistics and technology, has suggested standing up a new high-level office to streamline ongoing initiatives, using the Pentagon’s Joint Counter-small Unmanned Aircraft Systems Office as an example of a model that could work for JADC2.

“We have a counter-UAS office. It’s a joint office that actually helps prioritize our investments from a joint perspective,” he said in June at a conference hosted by the National Defense Industrial Association. “That kind of organizing body there could be useful in terms of making sure [JADC2] requirements are actually set and prioritized to get into the services.”

He also suggested holding more large-scale exercises under the auspices of the regional combatant commands, such as U.S. Indo-Pacific Command, “where we actually go and do this at scale [in the] field together in a joint way … and we build on what the services are doing to kind of get some ground truth,” he said. “I know they’re already doing a lot of experimentation, but bringing that to kind of the next level to make sure it’s integrated across the force — that could be another big thing that would move the dial to see find out what works and what doesn’t.”

It’s unclear exactly how — or when — the additional high-level oversight that Hicks is calling for might be implemented, but the defense official close to Hicks indicated that she essentially agrees with the premise of Bush’s suggestions.

There is currently a cross-functional team that has been overseeing the execution of the Pentagon’s JADC2 strategy, with several working groups focusing on different areas.

“When we see in the press that the services aren’t aligned behind JADC2, I cringe,” Rear Adm. Susan BryerJoyner, deputy director for command, control, communications and computer/ cyber systems, J-6 for the Joint Staff, said during a presentation at the AFCEA TechNet Augusta conference on Thursday. “They’re approaching different pieces of the problem that need to be solved. They’re not incompatible, they’re complementary.”

Earlier this year, Hicks signed off on a classified JADC2 implementation plan that details plans of action, milestones and resourcing requirements, and identifies the DOD organizations responsible for delivering capabilities, according to a Defense Department news release.

“If you ask any two people what they think JADC2 is, you’ll probably get different answers — and I think that really is partly because we have a hardware-centric approach to how we think about innovations in the Defense Department. This is really a software-centric enterprise problem, and our approach will look like that,” Hicks said during her trip last week.

Unfolding pursuits connected to the Joint Warfighting Cloud Capability initiative and the newly established Chief Digital and Artificial Intelligence Office are anticipated by her and other defense officials to allow for improved collaboration down the line. 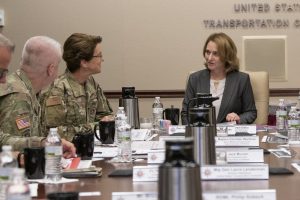