Hypersonic missiles are designed to fly faster than Mach 5 and be highly maneuverable. The weapons are anticipated to provide military advantage in the next era of warfare, prompting a sharp focus and additional funding from America, China, Russia and others in recent years.

With that, and the growing hype around it all, there’s also increasing analyses essentially ranking how different countries are designing, testing and deploying hypersonics. But Hicks said making such comparisons are “the wrong way to look at the problem.”

“It has an arms race mentality to it and we hear a lot of it. So, it’s a fair reflection of where I think a lot of the conversation has been. The reality is that the United States has a series of concepts for how it believes it can fight effectively,” Hicks told journalists accompanying her on a multi-state tour of government and academic facilities that are supporting the nation’s development of modern platforms and tools necessary for future conflicts.

While she did not elaborate on Russia’s employment of these types of missiles, Hicks said “it’s wrong” to focus solely on the numbers of systems Russia or other countries have, suggesting other nations wouldn’t necessarily use them as effectively as the U.S. military or its allies.

“We’ve seen this very clearly on the Russian tank side, for instance, as well,” the deputy secretary added, pointing to what many observers see as shortcomings in the Russian military’s employment of its forces in Ukraine.

Defense Secretary Lloyd Austin is very intent on making sure the Defense Department stays “laser-focused” on the capabilities that the U.S. needs to effectively prosecute a campaign in any future war, Hicks said.

“I don’t want to say much more than that for obvious reasons,” she added.

Pentagon officials have previously said that hypersonics could be used to hit time-sensitive targets or heavily defended targets.

The department plans to begin fielding newly developed systems next year. Russia and China have already fielded these types of weapons.

At Purdue University, the last stop on her two-day tour of high-tech facilities, Hicks engaged faculty, students and scientists on efforts pertaining to hypersonics, microelectronics and other critical fields.

Industry and academia contribute in major ways to the Defense Department’s hypersonics-aligned pursuits. On Purdue’s sprawling campus, Hicks was briefed on a wide range of topics including nanotechnology, workforce development and equity, quantum information science and public-private collaboration.

She also toured Zucrow Labs, where she received briefings on hypersonics research, energetic materials and propulsion.

Assistant professor of aeronautics and astronautics Joseph Jewell noted the university has pursued hypersonics research for decades. Currently, 14 graduate students are studying in its program — more than half of whom already hold security clearances.

“Most of them go on to work in defense-related technology once they graduate,” said Jewell, who served for more than five years in the Air Force Research Laboratory’s hypersonics office before joining Purdue in 2019.

“As part of the next-generation here, we are standing in Purdue’s new 65,000-square-foot, $41 million hypersonics and applied research facility, which will house two new hypersonic wind tunnels to add to our already world class, Mach 6 — the largest low disturbance hypersonic tunnel in the world,” he noted during the tour.

Hicks walked through space that will house future hypersonic capabilities, including one that will be active by 2025.

“[It] will be the large Mach 8 low-disturbance flight tunnel — a full-flow but low-atmospheric disturbance level hypersonic tunnel that will also be the first of its kind in the world,” Jewell said.

Following the university visit, Hicks briefed reporters on some of her takeaways.

“I do think we’ve had some really promising movements on the U.S. hypersonic programs — plural,” she said. “And they’re in line with how we think about the employment strategy.” 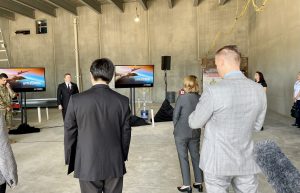