The Department of Defense’s Joint Artificial Intelligence Center is ready to focus its efforts on bringing AI to warfare, Lt. Gen. Jack Shanahan said Friday during his last day leading the office.

The JAIC’s initial efforts have been on lower-risk and more public-friendly efforts, like using AI for humanitarian assistance and disaster relief and predictive maintenance. The AI hub’s work will not immediately turn to “killer robots,” but it will tackle projects like faster communications under its Joint Warfighting mission initiative, the general said during a virtual event with the Center for International and Strategic Studies.

“We have to get AI right for our own purposes and our own national security,” Shanahan said of the JAIC’s work. “We can’t afford to let up on the gas pedal one bit, I would say we have to go faster.” The general is retiring from a decades-long career in the Air Force as the inaugural leader of both the JAIC and the DOD’s Project Maven.

Shanahan stressed that at every turn the JAIC is working to implement its ethical principles for AI. The JAIC currently has a team dedicated to turning the principles into action and is piloting a “responsible AI champions” program to ensure ethical questions are raised across different product teams.

The lines of effort in the Joint Warfighting initiative include the military’s futuristic network-of-networks Joint All Domain Command and Control (JADC2); “Overmatch,” or using AI to wield more firepower and ability than an enemy force; “Joint Fires,” where weapons are coordinated to increase lethality; electromagnetic spectrum operations that disable communication networks; and “Strategic Mobility,” for which AI can help facilitate logistics.

Earlier in May, the center inked an $800 million task order with Booz Allen Hamilton to kickstart its work with industry on the initiative. Booz Allen will serve as the prime “integrator” and bring smaller subcontractors into the fold.

Service members in the field should expect to see more AI-enabled tech soon, Shanahan said. The general is a fan of pushing minimum viable products directly to the user to be able to gather feedback. Shanahan reiterated that 2020 will be the year of AI “delivery.”

“People in the field have begun to taste what AI can be in the field,” he said. Critically, service members are also learning what AI is not, he added.

Since products the JAIC is developing will be used in the so-called kill-chain, testing and ensuring they work will be paramount, Shanahan said. Most AI-enabled technologies remain vulnerable to data anomalies, including junk data deliberately supplied by adversaries.

At a virtual event earlier in May hosted by AFCEA, the general said the JAIC will be the “gold standard” for AI testing and evaluation, with the goal of outpacing Silicon Valley companies that do similar work.

For the JAIC, working with allies and partner nations has been core to its growth, but many remain skeptical of having AI run in the same chain as lethal weapons. So far, allies like NATO member states have focused on low-consequence technology like humanitarian assistance and predictive maintenance. Shanahan said there is some suspicion among NATO members that U.S. efforts are too oriented around lethal weapons.

Allies are “interested in those lower-consequences, lower-threat use cases for NATO,” Shanahan said.

Previously, Shanahan has been critical of overly cautious approaches some European nations have taken in the debate around AI’s use cases in the military.

“[W]e are concerned that some countries in Europe are at risk of becoming immobilized by debates about regulation and the ethics of the military use of AI,” he said in January following meetings in Brussels. 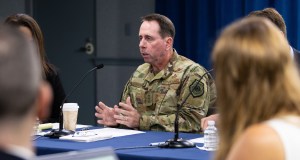