Karen Evans, a former top federal IT official, has been picked to lead the Department of Energy’s new cybersecurity office.

The White House announced its nomination of Evans late Tuesday as assistant secretary of Energy for cybersecurity, energy security and emergency response, heading the office of the same name created by Secretary Rick Perry earlier this year to protect America’s energy infrastructure from cyberattacks.

A former top IT official at the Office of Management and Budget under President George W. Bush in the position that has gone on to become what’s now the federal CIO, Evans has also served as the Department of Energy’s CIO. More recently, she was an IT adviser on Trump’s transition team. Outside of government, she has been an advocate of improving the nation’s cybersecurity workforce through the U.S. Cyber Challenge.

Evans would rejoin DOE at a momentous time for the department as it looks to execute a new cybersecurity strategy and boost the defenses of U.S. energy companies through an information-sharing program.

Energy Secretary Rick Perry has been outspoken lately about the industry’s cybersecurity challenges. “The sustained and growing threat of cyberattacks to our energy infrastructure requires us to think differently, to act proactively,” Perry said earlier this month.

Bruce Walker, another top DOE cyber official, has been serving in as acting assistant secretary for cybersecurity, energy security and emergency response.

Evans’ nomination will go through the Senate Energy and Natural Resources Committee. 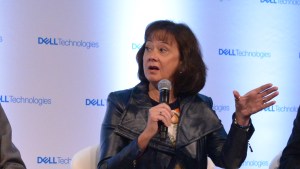