Lawyers for Katie Arrington have submitted an amended complaint against the Department of Defense and National Security Agency over the decision to suspend her security clearance and place her on paid leave.

The new filing expands prior arguments made by her legal counsel demanding access to classified information cited by the defendant agencies in order to address allegations against her.

Arrington was placed on paid, non-duty status in May following the suspension of her security clearance.

According to court documents, she was informed by a security officer within the Office of the Under Secretary of Defense for Acquisition and Sustainment that the NSA had revoked her clearance “as a result of a reported unauthorized disclosure of classified information.” She was suspended from her role as chief information security officer for acquisition and sustainment. In that role, Arrington was most known for her work championing the DOD’s Cybersecurity Maturity Model Certification (CMMC).

“In order to be able to fully protect the Plaintiff’s rights her legal counsel will require access to any alleged classified information the defendants maintain underly the security clearance allegations against her,” the amended complaint says. “Upon information and belief, the plaintiff’s primary undersigned legal counsel holds a valid and current security clearance eligibility that would permit a review of the relevant information.”

Arrington’s lawyers are seeking a court order that would force the DOD and NSA to disclose relevant information, according to the submission. They seek also a hearing that would give the defendant a chance to clear her name.

Legal counsel for Arrington said that the complaint speaks for itself. The NSA declined to comment. A DOD spokesperson said the department does not comment on pending litigation or personnel matters.

Editor’s note: This story was updated to include comment from Arrington’s legal counsel. 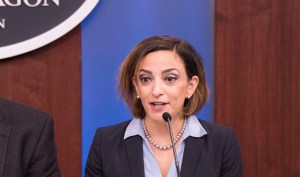