The commandant of the Marine Corps wants the service to focus on logistics as a prime use case for artificial intelligence, he said at the Navy League’s Sea-Air-Space conference.

Gen. David Berger, the Marine Corps’ top officer, said that logistics is both an area of extreme importance in a potential future war and one where AI can be helpful. He told the audience at Sea-Air-Space 2021 he wants industry to bring advanced data analytics tools to the USMC to assist in its modernization.

“Look at an area like logistics…if you assume you need to be capable of operating distributed then logistics [comes] to the foreground,” he said.

Military planners assume a potential war with Russia or China would involve logistics being targeted by adversaries to try and stop the resupplying of troops. Marines on the front lines can’t fight with out the ability to refuel vehicles or get more ammunition, Berger added. Using emerging tech to make more resilient resupplies and harden their infrastructure would go a long way in preparing for any potential war, he said.

“If you think we are going to be able to that in a human mind … that is not going to work,” he said of relying just on humans to manage complex supply chains in a battle.

He said that much of the tech to assist marine logisticians is available today in commercial industry, but not to the corps yet. He added that he wants younger officers to be the ones testing and evaluating new tools form industry since they grew up using tech.

“The tools are there now,” he said.

The Marine Corps is already testing fifth generation telecommunication tech in logistics centers to improve warehouse operations. But the commandant want the corps to expand the use of emerging technology in the delivery of supplies in potential battles, not just on bases.

The USMC also recently started building a new wargaming center that will use AI to test its self against potential adversaries. 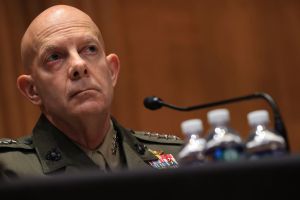