Construction of a new wargaming center that will test future battle strategies and tech for the Marine Corps will be completed by the summer of 2023, the service has announced.

To accommodate wargames that will incorporate a range of future battlefield scenarios, the facility will include new modeling and simulation, visualization, immersive and analytical tools, according to a news release. The facility was first envisioned by then-Commandant Robert Neller in 2017 to help the corps’ “ability to make analytically-informed decisions” about its weapons and capabilities.

Located in Marine Corps Base Quantico, Virginia, the center is slated to open in 2024 and should be fully equipped by 2025.

“This facility is a big deal to us,” said Lt. Gen. Eric Smith, deputy commandant for the Marine Corps Combat Development and Integration. “There are a bunch of officer candidates training right now who have no idea what is going on here today. But they will benefit [from this facility].”

The facility intended to give senior leaders a more immersive understanding of what future battlefields may look like, and what capabilities future Marines will need. The Marine Corps has been on a journey to remake its force design to focus on deterring great power conflict by relying more on long-range precision fires, unmanned systems and advanced reconnaissance technology — all tech that the corps plans to test in a virtual scenario at the wargaming facility. 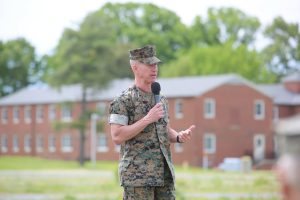