The Marine Corps‘ newest battalion is a first-of-its-kind group of cyberwarriors activated to defend and modernize the enterprise network that supports the service and its command-and-control network.

The Corps said in a recent release that the new force, called the 1st Network Battalion, was activated in early June, marking “the beginning of the Marine Corps Enterprise Network (MCEN) Command and Control (C2) modernization implementation plan.” The Corps has other components focused on offensive cyber-operations, but it says this is the first group solely dedicated to defending the enterprise network.

“1st Network Battalion is the unit responsible for providing all aspects of security, operations, and protection for Department of Defense Information Network from the enterprise at the service level, down to each individual warfighter throughout the entire Western Region,” Lt. Col. Juliet Calvin, the battalion’s inaugural commander, said.

1st Network Battalion says it can work on issues down to level of an individual users’ desktop to improve security. The Corps’ goals for modernizing its enterprise network and command-and-control systems are to increase resiliency, interoperability, expeditionary and to be more “unified.” The strategy was published in March 2017.

“MCEN C2 has been discussed for years, but now we are taking the first critical step to make this a reality,” said Col. Edward J. Debish, the commanding officer of Marine Corps Cyberspace Operations Group which houses the new battalion. “This decision creates unity of command for the security, defense, and operation of the Marine Corps Enterprise Networks.”

Battalions generally are made up of about 1,000 Marines. The corps plans to grow the number of Marines dedicated to cybersecurity with plans to stand up more network battalions in 2021 and additional units of Marine reservists to work on network security.

“Lt. Col. Calvin’s battalion is empowered to decisively take action at the lowest level to quickly respond to the warfighter’s needs,” Debish said. “Her battalion will work closely with I Marine Expeditionary Force (I MEF), Marine Corps Installations West, and the training commands to seamlessly deliver enterprise services to our Marines.” 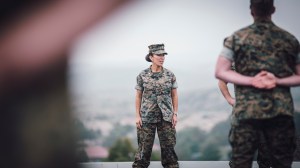