The commandant of the Marine Corps wants to create a new command focused on improving information operations, and he is directing officials to develop options for doing so.

The guidance was included in the annual update to Gen. David Berger’s controversial vision for transforming the Corps known as Force Design 2030, released Monday.

“We believe that in a conflict with a peer adversary, first moves may be in space and cyber, so we must enable our Stand-in Forces, MEUs, and MEFs to integrate with, and have access to, those capabilities now,” the document says, referring to Marine expeditionary units and Marine expeditionary forces.

It continues: “We can streamline and simplify much of the coordination burden at the headquarters level if we re-organize and re-focus some of our structure, which we will do in the future with the creation of the Marine Corps Information Command (MCIC).”

One of the action items included in the document was to develop options for the creation of the MCIC.

The update to Force Design 2030 was informed by the Corps’ ongoing “campaign of learning” which includes wargames, analyses, experiments, and exercises that are used to underpin investment and divestment decisions as the service moves to modernize to compete with China.

In recent years, the service has divested legacy systems such as tanks and is buying new systems that Berger believes will be more relevant for the Corps on modern battlefields in the Indo-Pacific region. It is also refining its operating concepts to be better prepared to fight an advanced adversary such as China.

The update to Force Design 2030 noted shortcomings in doctrine and training when it comes to operations in the information environment (OIE).

“The Service lacks adequate OIE doctrine or training standards. This leads to a lack of awareness, education, and experience often reflected in commanders and staffs grappling with operating in a multi-domain environment and applying and integrating information capabilities” at the Marine Air-Ground Task Force Warfighting Exercise, it said.

The Force Design 2030 update directed the office of the deputy commandant for information and Marine Corps Training and Education Command to build upon the foundation created by MCDP 8 and produce the requisite doctrinal foundation for operations in the information environment. 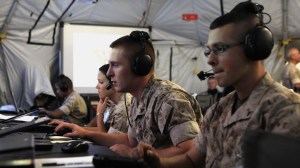