After being passed over as the lead organization for developing new capabilities to defend the homeland against enemy cruise missiles, the Missile Defense Agency is trying to figure out what its role will be in a highly anticipated technology demonstration scheduled for fiscal 2023 and how it will be executed.

Last month, under pressure from lawmakers for a decision, Deputy Defense Secretary Kathleen Hicks tapped the Air Force to be the acquisition authority for homeland cruise missile defense.

During a pre-recorded event that aired Friday, MDA Director Vice Adm. Jon Hill was asked how his agency will interface with the Air Force going forward as the Pentagon plans to conduct the tech demo.

“It’s a great question and it’s something that we’re gonna have to work through,” Hill said at the event hosted by Defense News.

“We’re going to still, as I understand it now, since the budget did fund us to go execute a National Capital Region demonstration — we want to make sure that there’s no misalignment with the assumptions that we’ve made on the architectures with what the Air Force wants to do in the future and where the department wants to go,” he said.

“No one has told us to stop [these efforts]. And I’ve been having conversations with the Air Force on how to proceed forward. Everything from the analysis that we’ve done to date, providing that to the Air Force, because they should … have that so they can assess it and make their decisions as the lead service. We’re going to pull them into that demo or turn that whole demo over to the Air Force for execution. So, it kind of depends on what they want to do,” he added.

Hill said his agency will “fully support” the Air Force with whatever it needs, as well as U.S. Northern Command — the combatant command responsible for defending the continental United States.

Air Force Gen. Glen VanHerck, commander of Northcom, has been banging the drum about the need to bolster America’s defenses against air- and sea-launched cruise missiles that could be launched by Russia or China in particular.

“The threat exists today,” he told reporters at a Defense Writers Group meeting in April. “So the urgency is there in my mind. This is the decision space we’re ceding for our national leaders.”

VanHerck is calling on other organizations to think about a wide range of potential technology solutions.

“What I want in industry, what I want in Missile Defense Agency [and] the services to do is let their minds run wild on capabilities to accomplish this mission,” he said.

Such capabilities could include using the electromagnetic spectrum or other “non-kinetic means” — not just missiles that are designed to kill other missiles — to thwart attacks.

Officials have also highlighted the need for additional sensors.

“We have to have all domain awareness — that’s sensing capability,” Hill said on Friday. “And we need to have as much decision space as possible to protect the country. So whatever contribution we can make, we will, but we will honor the fact that the Air Force has lead.”

Acquiring and deploying new sensors, shooters and battle management capabilities for this mission on a large scale would likely require substantial additional investment by the Defense Department.

In a report last year, the Congressional Budget Office said developing and deploying an architecture that could cover the contiguous United States would be “feasible but expensive, with costs ranging from roughly $75 billion to $465 billion over 20 years.”

In a report published last month, analysts at the Center for Strategic and International Studies proposed an architecture that they estimate would cost $32.7 billion over 20 years.

A key question that has yet to be answered but would greatly affect the scope of cruise missile defenses is how many potential targets the U.S. government would want to try to protect.

“As far as what we’re going to defend specifically, I think that’s a policy decision,” VanHerck said. “We’re working closely with DOD on policy on what to defend. I would say the most important things that you can think of, we already defend D. C. Certainly our continuity of our government, our key decision-makers that have a responsibility for nuclear command and control, our nuclear forces are key. Power projection capabilities, key defense industrial base, single points of failure in key critical infrastructure. It goes much beyond the Department of Defense.” 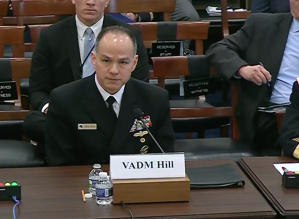