After two years of working across the aisle and navigating the channels of Congress, Will Hurd is on the verge of seeing his Modernizing Government Technology Act become law.

Now, he just has to work on an encore. The Texas Republican’s legislation is just one part of an effort to speed up digital transformation in the federal government.

“It’s exciting,” he said in an interview with FedScoop. “We got a bipartisan piece of legislation across the finish line. And it’s something that is going to help the federal government defend its digital infrastructure.”

The MGT Act builds on previous tech laws, such as the Federal Information Technology Acquisition Reform Act, by giving agencies more flexibility to procure IT, and it continues previous efforts to provide more accountability for federal chief information officers on how to manage what agencies buy. The bill proposes to allow agencies to put money saved through IT efficiencies into working capital funds, which can be accessed for up to three years, to fund efforts to modernize their technology. It also would create a centralized fund that agencies can tap into for modernization.

The congressman, while still a freshman, began his quest to change the way agencies purchase their information technology in July 2016, introducing the Modernizing Outdated and Vulnerable Equipment and Information Technology (MOVE IT) Act — cosponsored by Rep. Gerry Connolly, D-Va., and backed with companion legislation from Sens. Jerry Moran, R-Kansas, and Tom Udall, D-N.M.

That bill was later combined with a modernization bill from Rep. Steny Hoyer, D-Md., and dubbed the MGT Act. It now awaits the president’s signature, having passed Congress a week ago as an amendment to the fiscal 2018 National Defense Authorization Act.

Enactment of Hurd’s bill has been hotly anticipated in certain corners of Capitol Hill and in the White House, where the Trump administration’s Office of American Innovation has voiced support as part of its technology modernization policy.

But Hurd concedes that the legislation is not only a first step in replacing the government’s aging technology infrastructure, but also an incremental one at that.

“When it comes to the working capital funds, this is something we may not really see until the end of the fiscal year,” he said. “I’ve already been in conversation with the Office of American Innovation about where they see which agencies are best prepared to take advantage of this tool.”

MGT implementation could be part of the next FITARA scorecard in spring 2018, he said.

“We’re really getting away from it just being the FITARA scorecard to being a digital hygiene scorecard,” Hurd said.

Will there be a Cyber National Guard?

Beyond monitoring MGT implementation, the congressman said he has his eye on several other projects.

One of Hurd’s longstanding proposals is to create part-time digital service that would incorporate technology experts from the private sector or colleges for 20 days of national service to help strengthen the federal government’s cybersecurity posture.

Among the questions are whether it should replicate the National Guard, which serves both federal and state governments, or follow the lead of the military reserves and report strictly to the federal government.

“We are already drafting legislation,” he said. “The reserve model is probably more accurate in what we are trying to accomplish. We’ve been having conversations with the Office of Management and Budget to ensure that we have the job descriptions and the positions within the IT space.”

Hurd added that conversations are continuing over issues like which agency would manage the reserves, but that he would be forming a “bipartisan posse” to help develop the legislation.

What’s next in federal tech?

When asked what technology issues the federal policymakers will have to tackle next, Hurd said two draw his attention: artificial intelligence and quantum computing.

“When I look at quantum, we should be thinking of that in the same way we thought of Y2K,” he said, comparing technology capable of breaking any current data encryption model to the phenomenon of the late 1990s that potentially threatened to cripple global networks due to a bug in how computers commonly coded dates.

“Y2K came and went without any major thing happening because we spent a lot of time and money being prepared for that eventuality,” he said. “Why does quantum computing matter? Because it’s going to totally upend how we do encryption. And this is something that we have to start thinking about now.”

Alternatively, Hurd said the promise of AI provides the federal government the ability to capitalize on its troves of data to revolutionize the way it provides citizen services, the next step, he said, after moving agencies to the cloud.

“We should be beyond the point of talking about should we transition to the cloud,” he said. “In transitioning to the cloud, making sure it is set up for [incorporating] machine learning is the next step in making sure that we have a government that is responsive to the people that it serves.”

Even with quality legislation and broad support, there are plenty of good ideas in Washington that can die on the vine. Hurd said it takes time and patience to see legislation through Congress, but above all, it takes some advocates.

“Find a partner,” he said. “I’ve been lucky to have a partner like [Rep. Robin Kelly, D-Ill.,] who we’ve worked closely together on these issues. To be able to have folks like Steny Hoyer and [House Majority leader] Kevin McCarthy be supportive of these issues be supportive of these initiatives. Understand the problem and give it to the people that can solve it across multi-jurisdictions.

“It’s assemble that posse before you drop legislation if you expect to get things done.” 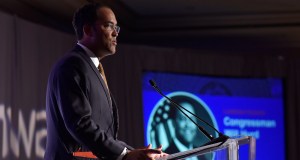 With MGT on the path to becoming law, Hurd looks to the future