Microsoft is set to combine its U.S. federal arm with its Azure cloud team and create a new subsidiary as part of a reorganization of the technology giant’s U.S. public sector operation.

In an email to staff Wednesday, Judson Althoff, executive vice president and chief commercial officer, announced the plans, citing the company’s experience with the Pentagon’s Join Enterprise Defense Infrastructure (JEDI) and other contracts and the need to bring its engineering and business teams together to better serve the federal market.

“Through our direct experience with JEDI and other similar initiatives, we know that working with the U.S. federal government requires the ability to deliver highly customized solutions. Our experience has also taught us the tremendous value of bringing our engineering team and our U.S. federal business unit closer together,” Althoff said in the internal memo, obtained by FedScoop.

Althoff wrote that the company will move its federal team into its engineering organization and “effective October 1, the U.S. Federal team will begin operating as its own subsidiary.”

Microsoft Federal provides cloud solutions to departments and agencies across the federal government, as well as Congress and the federal courts. It has worked with military and intelligence organizations to provide cloud solutions, including the DOD365 platform used by the Department of Defense.

Azure is overseen by Executive Vice President Jason Zander, who first joined the company as a software engineer and has been with Microsoft for nearly 30 years. Azure is the technology company’s flagship cloud product and is part of its cloud and AI division, which focuses on providing infrastructure-as-a-service and software-as-a-service tools for clients.

Azure was first launched by Microsoft in January 2010, as the technology company raced to take advantage of growing interest in internet-based software and services. At the time, it also sought to catch up with competitors Amazon and Google, who had previously begun offering cloud-based storage solutions.

“These changes ensure our ability to deliver the latest technology innovations tailored to the U.S. federal government’s specific needs,” Althoff added in his note to staff. “To that end, I encourage you to consider the new subsidiary like any other. In instances where customers transcend traditional commercial and federal boundaries, we should work together across teams and subsidiaries in their interest.”

Microsoft has a long track record working with government agencies, and for nearly two years was embroiled in a legal dispute with Amazon over the JEDI cloud contract.

Earlier this year, Microsoft filed a complaint with the Government Accountability Office over a billion-dollar cloud procurement involving the National Security Agency awarded to Amazon. It is understood that the GAO will decide the outcome of the bid protest by Oct. 29. 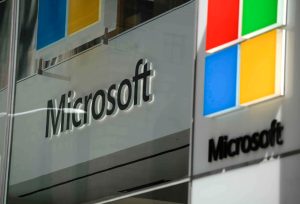