The U.S. Navy wants to think differently about the way it develops software. So, it’s looking to non-traditional areas of industry and academia for ideas on how to do that.

The service sponsored HACKtheMACHINE this past weekend in Seattle to gather the best and brightest in tech to take a look at some of the Navy’s biggest digital challenges.

Rear Adm. Lorin Selby — the chief engineer and deputy commander for ship design, integration and naval engineering for Naval Sea Systems Command — caught up with FedScoop before the start of the multi-day event designed to breathe fresh air into the Navy’s evolution as a digital entity.

The event — hosted by the U.S. Navy, Booz Allen Hamilton, and Fathom5 — was broken up into three tracks: Maritime Capture the Flag, Data Science and the Seven Seas and Hack for the Ocean.

The third track, for example, was focused on getting developers to show the Navy how to use “modern development practices” to deploy applications, the event’s co-creator Zachary Staples said Friday.

“The lessons from that are going to go directly into the developer guide that the program office who owns that network is going to use to go contract for applications,” Staples said.

In that track, teams were asked to put themselves in the position of first responders to Hurricane Katrina and deploy applications that emulate what a first responder DevOps team would do.

DevOps is a big area of focus for the Navy, Selby said.

“We’re trying to really crack that nut because if we can do that faster and better than others then we will continue to rule the seven seas,” he said.

Selby said the Navy has “pretty cool” problems to solve, and events like this are all about giving different people access to them and building relationships.

“We’re coming into a place like Seattle. We’re meeting people we may not normally interact with, different parts of industry we normally don’t touch,” Selby said. “And we’re actually meeting folks, building relationships. And so when we leave here we’re not going to just drop that.”

Events like HACKtheMACHINE can even be a recruiting tool, leading someone to work for the Navy one day, he added. This was the fourth iteration of the event, which has been hosted in several different cities. Naval Sea Systems Command’s sponsorship the event is a sign the event is maturing, said Staples, who is also the founder and CEO of Fathom5.

“A lot of the Navy leadership is going to be here, and the program offices, to just get a feel for the culture, about how modern software developers operate, and how they’re led and projects are built,” Staples said. “And you can’t get that sitting in the Pentagon.”

The event isn’t full of the usual suspects at DOD events either, Staples stressed. The first iteration of the event, which was held in San Francisco, was attended by “young developers from Facebook, Snapchat, and other tech companies.”

“They told me, ‘We’ve been playing military video games our whole life. We just never actually met someone in the military,’” he said. “And so when we came to them with something that was in their wheelhouse, which was working on a hard problem in a competitive format, they gravitated towards that.”

Events like this get the Navy’s problems in front of a different but “critical slice of America,” Staples said.

On Friday, Staples also stressed that people involved with the event are not interested in “innovation theater.” In throwing an event like HACKtheMACHINE, the team involved has gone to a lot of effort to bring interesting, difficult challenges to contestants to get real outcomes, he said.

Data Science and the Seven Seas, one challenge, for example, was designed to help the Navy build algorithms to assist manned and autonomous vessels with navigation.
“This challenge will use data from ships underway on the high seas to develop algorithms to assist the Navy with preventing collisions for human-operated and autonomous vessels,”  according to the event website.

The Navy collects reams of data, Selby said, but just uses “a fraction” of it to make decisions.

“We need to do a lot more, and so events like this, HACKtheMACHINE, expose us to kind of what others are already doing or thinking, and allow us to take those ideas onboard,” he said.

The Navy is running pilots to look at ways to use its data better — such as looking at developing algorithms that use machinery data to operate machinery more efficiently, Selby said.

Past iterations of the event have reaped rewards for the Navy. The data science challenge at a past event in Boston helped the Navy learn valuable lessons in how frequently it should gather certain data, and in what data it actually needs to collect, Selby said.

“All that has gone back into how we are now building our systems to do what we call condition-based maintenance,” he said. “We’re trying to actually, more optimally, run our machinery. And so those algorithms that we looked at, as well as the data quality, we’re taking those lessons back on board.”

Events like HACKtheMACHINE are important because the Navy can’t rely exclusively on “beltway bandits” to get its tech, said Brian MacCarthy, principal of the strategic innovation group at Booz Allen Hamilton.

“To bring emerging capabilities, the ones that we talked about, and the ones that we’re focused on in the three tracks, it is increasingly becoming more important for us to understand how to work with a larger community of interest, again the academics, the incubators, the accelerators, the startups,” MacCarthy said. “I don’t think that the Navy can simply rely on, kind of the beltway bandits, alone.” 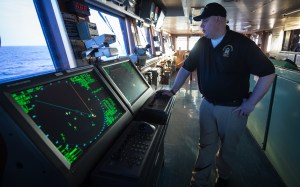