The biggest single tranche of Ukraine security assistance that the United States has announced to date will include VAMPIRE counter-drone systems and a slew of other weapons.

The new $3 billion package, announced Wednesday by President Biden to mark Ukraine’s Independence Day, will help Kyiv acquire counter-unmanned aerial systems (C-UAS), other air defense systems, artillery systems and munitions, and radars “to ensure it can continue to defend itself over the long term,” Biden said in a statement Wednesday morning.

The VAMPIRE counter-drone capability “uses small missiles essentially to shoot UAVs out of the sky,” Undersecretary of Defense for Policy Colin Kahl said during a press briefing at the Pentagon.

Contractor L3Harris describes its VAMPIRE, or Vehicle-Agnostic Modular Palletized ISR Rocket Equipment, system as “a portable kit that can be installed on most vehicles with a cargo bed for launching of the advanced precision kill weapons system (APKWS) or other laser-guided munitions.”

A defense official confirmed that L3Harris is the maker of the VAMPIRE technology that will be sent to Ukraine.

The tool can attack airborne targets such as drones, or ground targets. It was designed to fit into any pickup or vehicle with a flat surface, and installation can be completed in approximately two hours by two people using common tools, according to an L3Harris product description. It comes with a WESCAM MX-10 RSTA independent stabilized sighting system for target acquisition including electro-optical and infrared sensors.

Both Ukraine and Russia have used a variety of drones against each other’s forces for intelligence, surveillance and reconnaissance and to conduct strikes. Pentagon officials say that trend highlights the need for the U.S. to acquire more counter-UAS capabilities.

“What we’re seeing in Ukraine, I think, is bringing more to light of what we already know — that when you scale this [drone] capability from a small quadcopter all the way up to a larger Group 3 [system] and are able to leverage ISR to put other effects of other systems to bear, really shows the importance of having counter-UAS at scale, not just at a fixed site, but all the way down to the operational level,” Maj. Gen. Sean Gainey, director of the Pentagon’s Joint Counter-small Unmanned Aircraft Systems Office (JCO) and the Army’s director for fires, G3/5/7, said during an AUSA webinar broadcast on Tuesday.

According to the Pentagon, the new security assistance package for Ukraine includes:

·         Funding for training, maintenance, and sustainment

The Defense Department announcement did not provide further details about the capabilities of the Vampire counter-drone system in the press release.

Notably, the new batch of weapons and equipment will be procured from contractors through the Ukraine Security Assistance Initiative (USAI) fund rather than from a drawdown of Pentagon stocks, which had been the practice for most previous tranches of U.S. military aid to Ukraine since Russia’s invasion in February.

“Unlike Presidential Drawdown (PDA), which DoD has continued to leverage to deliver equipment to Ukraine from DoD stocks at a historic pace, USAI is an authority under which the United States procures capabilities from industry. This announcement represents the beginning of a contracting process to provide additional priority capabilities to Ukraine in the mid- and long-term to ensure Ukraine can continue to defend itself as an independent, sovereign and prosperous state,” Pentagon Press Secretary Air Force Brig. Gen. Pat Ryder explained in a press release.

“This USAI package, which is being announced on Ukraine Independence Day, underscores the U.S. commitment to supporting Ukraine over the long term — representing a multi-year investments to build the enduring strength of Ukraine’s Armed Forces as it continues to defend its sovereignty in the face of Russian aggression,” he said.

It’s unclear how long it will take for the Vampire system and the other weapons to arrive in Ukraine for use on the battlefield.

“It’s entirely possible than in some cases — for instance with the ammunition — that the defense contractors already have some in their stocks and it may not take very long to procure them and get them on their way. And in other situations where systems are more advanced … in those cases it could take — it could take a little longer for that materiel to get to Ukraine,” National Security Council Coordinator for Strategic Communications John Kirby told reporters Wednesday.

“So, it’s going to depend quite frankly on the item that we’re talking about or items and how fast it can be procured. And so not everything will have to necessarily be quote-unquote ‘built’ as of today, but some stuff will probably need some production time to develop,” he added.

Speaking broadly, Kahl said deliveries of equipment included in the package will begin in the next several months and continue over the coming years.

“We’re talking about systems that will take months to get on contract and you know, one, two, three years in some instances to arrive in Ukraine,” he said.

“We will endeavor to get the contracts filled out as quickly as possible and get stuff on the road, but I think we have to manage people’s expectations,” he added. “The package of capabilities here are really aimed at getting Ukraine what they’re going to need in the medium to long term.” 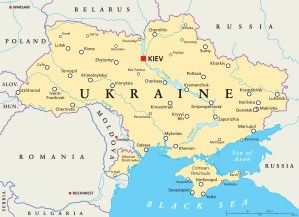