The New America Foundation is looking to get public interest organizations and technologists talking to, and learning from, one another. That’s the impetus behind the think tank’s Public Interest Technology Fellows program, the first cohort of which was announced on Wednesday.

What’s public interest technology? As the name suggests, it entails using tech to help public interest organizations — like those that focus on the environment, criminal justice or human rights — serve people better.

It’s a topic that’s attracted a roster of 15 participants for 2017, including Marina Stone Martin, former CTO of the Department of Veterans Affairs and Raphael Majma, former director of the Department of State’s digital services team. Other fellows come to the table with private sector tech backgrounds at companies like Facebook and Google.

This first group of fellows will focus on projects in three key topic areas: immigration, foster care systems and the intersection of criminal justice and mental health services. For example, fellow Jeremiah Lindemann, of geographic information system (GIS) mapping software company Esri, will work with local government to use data to map the opioid epidemic.

The think tank’s public interest tech team is supported by grants from the Ford Foundation and LinkedIn cofounder Reid Hoffman, according to a press release. 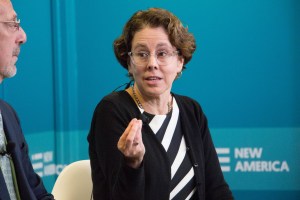