The Army has created a new group that will blend historical military intelligence activities with commercial data and public information to support cyber operations, according to a spokesperson.

While designated under Intelligence and Security Command, the Cyber Military Intelligence Group (CMIG) will directly support requirements for Army Cyber Command and function under its operational control, according to an Army news article released in February. It will direct, synchronize and coordinate intelligence support for cyber, information and electronic warfare operations while also providing support to U.S. Cyber Command and other combatant commands.

The unit will perform functions not found anywhere else within the Army or intel community, an Intelligence and Security Command spokesperson told FedScoop, noting that Army Cyber Command was the only service component command without a military intelligence brigade for intelligence support.

The team brings together personnel from a wide variety of disciplines across the intelligence and non-intelligence communities.

Army Cyber Command has been in the midst of a multi-year transformation effort to expand its focus beyond cyber to the broader information environment to pursue what it calls “information advantage,” deliberately eschewing the term “information warfare.”

The unique assets the new CMIG brings will provide Army Cyber Command the specialized intelligence it needs to drive operations in the information environment to ensure information advantage, the spokesperson said.

“This one-of-a-kind unit has a specialized mission to install, operate, maintain, and defend critical infrastructure and supporting networks to enable information advantage for Army and joint cyber forces,” 1st Lt. Garrett Steinbrugge, executive officer for Company C of the battalion, said during the activation ceremony.

The organization will also support operations for U.S. Cyber Command, performing duties related to Task Force Echo, a National Guard effort that has been underway since 2017. Little public information is known other than it supports full spectrum cyber operations. The task force has supported Cyber Command’s Cyber National Mission Force, which conducts offensive ops under the guise of defense to protect the nation from malicious cyber actors. Sources have indicated that it has also supported Joint Task Force-Ares, which sought to limit the Islamic State group’s abilities in the digital world.

During a March 17th ceremony, the group was placed under the Army’s Cyber Protection Brigade, according to an Army release. 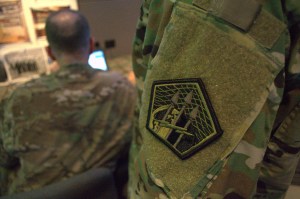