A new unclassified report on investigations into unexplained phenomena observed by federal and military officials suggests the Pentagon has made recent progress in establishing more effective mechanisms for data- and information-sharing on the historically sticky topic of UFOs. But questions about the government’s collection of associated intelligence largely remain.

After mounting public pressure, lawmakers passed provisions in the National Defense Authorization Act for fiscal 2022 requiring the Office of the Director of National Intelligence and Defense Department to submit “a report on unidentified aerial phenomena (UAP)” to appropriate congressional committees by Oct. 31 2022, and annually thereafter through 2026. A classified version of ODNI’s 2022 annual report was delivered to Congress on Wednesday, several months after it was due, and an unclassified version was released publicly Thursday.

In that public, 12-page review, officials provide brief details about “366 additional reports of UAP” since the government’s preliminary assessment identified 144 reports — a total of 510 cataloged accounts to date.

The “majority of new” UAP reporting originates from Navy and Air Force aviators and operators who “witnessed UAP during the course of their operational duties and reported the events” to DOD’s now-defunct UAP Task Force and its recently formed All-Domain Anomaly Resolution Office, or AARO, through “official channels,” the report states.

“Broadly speaking, when it comes to the types of processes and procedures that have been established, [AARO], as you highlighted, has closely worked with each of the service branches to come up with a streamlined reporting system to be able to collect that information. And then, in addition to the military branches, it is also working with the interagency — so, organizations like NOAA, the Coast Guard, and the Department of the Energy, just to name a few,” Pentagon Press Secretary Brig. Gen. Pat Ryder told DefenseScoop during a press briefing on Friday.

“And so, by establishing those reporting procedures, what it does, and I think you’ll see this in the report, is it allows the collection of data, and more data allows us to be a little bit more rigorous in terms of how we go after investigating these incidents,” Ryder added.

Notably, when AARO was established by Deputy Defense Secretary Kathleen Hicks in July 2022, the Pentagon also updated its official terminology for UAP to mean unidentified anomalous phenomena — and no longer unidentified aerial phenomena — to account for reported objects that appear to move between mediums. NASA quickly followed suit.

DefenseScoop confirmed with a Pentagon spokesperson on Thursday that, while all the future annual UAP reports through 2026 will account for that update and include data on anomalous phenomena, this 2022 review refers to airborne happenings in U.S. airspace.

In that public assessment, officials wrote that “UAP continue to represent a hazard to flight safety and pose a possible adversary collection threat” to the U.S., at this point. However, improved coordination between the intelligence community, DOD and other agencies has resulted in more data sets that span air, sea and space.

“AARO, in coordination with the IC, is focused on identifying solutions to manage and alleviate the resulting data problem, including the intake, indexing, visualization, and analysis of that data across multiple security domains,” officials wrote.

Those reports are not yet fully resolved — but again, some progress has been made.

At this point, though, the government also has evidence of 171 uncharacterized and unattributed UAP reports that each requires further analysis for clarity, according to the review.

In an online response to the report, Chris Mellon — a national security expert who previously served as deputy assistant secretary of defense for intelligence under presidents Bill Clinton and George W. Bush — argued that it demonstrates how “major progress in developing an effective government capability for investigating the UAP enigma and kicking down the doors of ignorance that for far too long have prevented progress in understanding the phenomenon.”

The war unfolding in Ukraine and recent conflicts in Armenia and in Yemen are revealing how drones are increasingly integral in modern military conflicts, another factor that plays into investigating UAPs.

“Therefore, any capability that helps to reduce clutter and identify genuine aerial threats is of great value to the military and national security. In that regard, Congressional initiatives related to UAP are already paying dividends by improving our ability to distinguish legitimate threats from innocuous balloons and other airborne clutter,” Mellon wrote.

Still, in his view, the new report also “presents the bare minimum of information needed to comply with Congress’ request” for an unclassified assessment. He noted that there was no indication if the uncategorized reports captured so far were in space or underwater, or they were attributable to foreign governments.

Since the IC’s first preliminary UAP assessment in June 2021, “UAP reporting has increased, partially due to a concentrated effort to destigmatize the topic” and instead recognize the safety risks or adversarial activity it implies, officials wrote in the first NDAA-mandated UAP annual assessment. They also expressed confidence that AARO, and its new analytic process being applied to its expanding portfolio of reports “will increase resolution of UAP events.”

Among other notable inclusions, the 12-page public assessment confirmed that there have “been no encounters with UAP confirmed to contribute directly to adverse health-related effects to the” observers to date. Military aviators in the past have reportedly experienced adverse health effects with symptoms like that of the mysterious Havana syndrome, which has impacted U.S. spies and diplomats.

When asked by DefenseScoop during the Pentagon briefing on Thursday whether the department or ODNI could share more details about what any anomalous health incidents associated with UAP sightings actually ended up being due to, Ryder said that he did not have further information to provide at the time.

“I would say, broadly speaking, I think one of the key points in this report, you know, is given the potential hazard that UAPs do present — notably — there’s been no reported collisions of military aircraft, or U.S. aircraft rather, and UAPs. But in terms of those specifics, I’d refer you back to the report,” Ryder said. 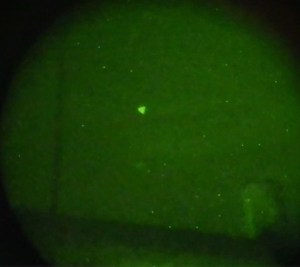