Capt. Phil Hall, an emerging technologies officer at the National Oceanic and Atmospheric Administration, said it was always “clear” to NOAA that drones should be classified as aircraft.

For NOAA, an agency that regularly uses its 54 UAS to collect data at sea, check out hurricanes and more, this means the drone program is controlled by aviation specialists.

“I think that’s been the best decision we’ve made,” Hall said. “Because people who aren’t aviation experts just don’t have the same level of concern we do about airspace.”

This is a prudent policy, given how the FAA categorizes drones.

“There’s very little distinction when we’re talking about aircraft from bringing in a Gulfstream IV (airplane) into your organization and bringing in an off-the-shelf drone,” said David Preznuk, program manager at IT consulting firm Macro Solutions and the moderator of Wednesday’s panel. “From a regulatory standpoint, if it’s an aircraft, it’s an aircraft, and it needs to comply will all the rules associated with using an aircraft in the national airspace.”

Of course, those rules have changed over time. Federal agencies generally use Certificates of authorization from the FAA to conduct drone flights. Now that Part 107 of the Federal Aviation Regulations, ostensibly a commercial-sector rule, is in effect though, Hall said NOAA sometimes uses this too.

“It depends on what we want to do and where we want to fly how we approach our approval,” he said. The agency also has an agreement with the FAA that allows it to fly drones under 1,200 feet in uncontrolled airspace.

Not everyone agrees that drones should be treated as aircraft, though. Some have argued that a more precise definition for drones is needed because bunching them together with other kinds of aircraft puts an undue burden on the innovation.

Wherever one stands on this question, it is also worth noting that drones bring up IT issues that go beyond those of traditional aircraft. As Wednesday’s panel noted, drones are essentially data collection platforms — gathering, storing and sending huge amounts of data. This requires a broad-ranging IT infrastructure, all of which needs to be kept secure. 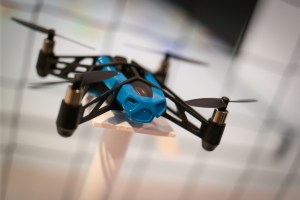 Those drones NOAA flies into hurricanes? It classifies them as aircraft, not tech