The military’s Northern Command says it is using new apps developed with Silicon Valley’s help to allow hundreds of personnel deployed at health care facilities across the country to communicate directly with commanding Gen. Terrence O’Shaughnessy.

The technology represents a completely new way for military personnel in the field to provide information directly to the top, O’Shaughnessy says, and the process is putting new command and control ideas into practice. The companies working with NORTHCOM on the project include Palantir and Esri, with help from Apple. Another firm with expertise on highly secure apps — the Northern Virginia-based Monkton — is also contributing.

About 700 U.S. soldiers, airmen and sailors under O’Shaughnessy’s command are responding to the coronavirus pandemic alongside civilian health care workers. Commanders can get twice-daily updates on the physical and mental health of the personnel, O’Shaughnessy said during a webinar in early May.

Two of the apps, Esri’s “Survey 123” and Palantir’s “Palantir Mobile” allow service members to log in and fill out forms on how they are physically and mentally feeling with others being for logistics and medical reporting.

The new apps are a part of a technology modernization revolution O’Shaughnessy said the pandemic has brought to NORTHCOM and the North American Aerospace Defense Command (NORAD), which O’Shaughnessy also leads. Both commands are also using its own tech developments in the fight agains COVID-19.

Technology being developed as part of Joint All Domain Command and Control (JADC2) — the military’s network-of-networks Internet of Things — is being used to oversee the use of the apps. Using the apps in a JADC2 architecture has enabled both “enhanced communications and Common Operating Pictures,” allowing commanders to integrate information into easy-to-access dashboards, according to Northern Command spokesman, Bill Lewis. The added advantage of using the JADC2 model instead of typical command and control networks was having real-time access to data that can be used to inform decisions much faster than other methods.

“Ultimately, the command tried to field a capability that increases the Commander’s understanding of the fight against COVID, the real-time status of our deployed forces, and our ability to communicate with those forces,” Lewis told FedScoop in an email.

Using JADC2 helped feed predictive analytics to monitor and project COVID-19 cases. The command used a new platform developed with the help of Google called “AIsmartONE” to use artificial intelligence initially designed with JADC2 to predict the spread of coronavirus, Lewis said. The platform analyzed data on hospital capacity, reproductive rates and other metrics, that directly informed decision making on where the general deployed personnel across the country, decision he said that have helped save lives. 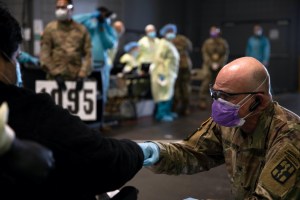 Northern Command calls upon Palantir, Apple and others to bring new tech to coronavirus fight