The recent SolarWinds breach at several federal agencies has made it clear: “We have a lot of work to do” to improve the government’s use of technology, President Biden’s pick to run the Office of Management and Budget said Tuesday during her confirmation hearing.

Neera Tanden pledged Tuesday to make IT modernization and cybersecurity top priorities if confirmed as director of OMB, which houses the roles of Federal CIO and CISO; the U.S. Digital Service; and the Information Technology, Oversight and Reform fund that supports those offices.

“I think we all recognize that this is not just some far-off risk, it’s a real risk to the American public and their own data,” said Tanden, who was president of left-leaning think tank Center for American Progress prior to her nomination. “And it is increasingly one that other countries are weaponizing. And so it is a high priority.”

Much like President Biden’s American Rescue Plan, Tanden pointed to the Technology Modernization Fund as the vehicle of choice to bolster federal cybersecurity and kick modernization into overdrive. In response to the SolarWinds incident and the ongoing need for technology during the pandemic, the administration has proposed a $9 billion injection of funding into the TMF — a central pot of appropriations intended to fund modernization projects under the stipulation that participating agencies pay back the funding within five years. Tanden advocated for agencies using TMF funding to move decades-old legacy systems to the cloud, shoring up cybersecurity along the way.

But it appears Congress once again has decided to kick the can down the road on expanded funding for the TMF. Lawmakers removed a proposed $9 billion increase from the next COVID-19 relief package due to a hangup in the Senate, FedScoop learned earlier this week. The Biden administration will continue to push for the money in future funding bills.

“We recognize the importance of this modernization, also during a global pandemic, where we need to make sure that our agencies’ information and essentially the public’s privacy is protected, and protected well,” she testified before the Senate Committee on Homeland Security and Governmental Affairs. “So modernizing our systems and allocating resources so that we modernize our systems is really, I believe, a way in which we can make the federal government much more efficient, much more effective, and much more directed to the needs of customers are the American citizens.”

Tanden really emphasized the need for the government to be more in touch with the needs of the American public as they come to it for services. She called it ironic that the U.S. government is so “woefully inefficient and ineffective because we don’t really use technology effectively,” when the nation’s commercial tech industry is one of the most innovative in the world.

“We have the greatest technological innovations and some of the most technologically innovative companies, and our country, our government, you still can’t access information, small businesses can’t find out if they can get access to a small business loan as efficiently, as effectively as possible,” Tanden said.

Tanden likely won’t face an easy road to confirmation in an evenly split Senate due to her partisan background. Sen. Rob Portman, R-Ohio — a former OMB director himself — brought up some of her controversial partisan jabs on Twitter at his Republican colleagues — many of whom will vote on Tanden’s confirmation, like Sen. Ted Cruz, R-Texas, whom she compared to a vampire.

“I do think the last several years have been very polarizing and I apologize for my language that has contributed to that,” said Tanden, who since deleted the troublesome tweets. “I know it’s on me to demonstrate to this committee and to Republican members and Democratic members I can work with anyone.” 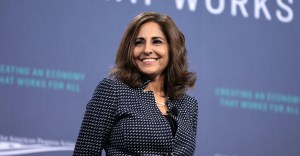 OMB nominee Tanden on technology: ‘We have a lot of work to do’