Lawmakers removed a $9 billion increase to the Technology Modernization Fund from the next COVID-19 relief package due to a hangup in the Senate, a congressional source said Monday.

It’s not the first time an expansion of the TMF — a White House-administered program for boosting agencies’ IT — has been proposed as a component of a coronavirus response bill, only to fall aside as the House and Senate negotiated the packages.

In this case, Sen. Kyrsten Sinema, D-Ariz. took issue with the cost, the congressional source said. Her office could not be reached for comment prior to publication.

Democratic Reps. Carolyn Maloney of New York and Gerry Connolly of Virginia, who chair the House Oversight Committee and its Government Operations subcommittee, respectively, petitioned hard for a TMF boost benefitting high-priority IT and cybersecurity projects in a late January letter to House leadership.

But despite President Biden‘s initial support for improving federal IT, he’s also been looking for ways to shrink spending in the relief bill. The president wants a $1.9 trillion package that emphasizes helping unemployed people, lower-wage workers and families with children.

The proposed TMF funding would represent, by far, the biggest boost to the fund since its creation in 2017. Over the program’s entire lifespan, Congress has allocated a total of $150 million to it. Proponents of the TMF tout it as a quick and efficient way to get dollars to crucial IT projects, outside of the usual flow of agency budgets.

That efficiency is even more important during the pandemic, wrote the eight representatives in the January letter to leadership.

“Without modern and nimble IT systems, the federal government cannot deliver critical payments and services to individuals, families, and businesses who rely on them,” the lawmakers wrote.

Discussions are already underway to include the $9 billion for the TMF in another piece of upcoming legislation, said the congressional source, who asked not to be identified so as to speak freely about the negotiations.

The relief bill still includes $1.2 billion for other IT- and cybersecurity-related provisions, the congressional source said. Those include shared security services from the Cybersecurity and Infrastructure Security Agency; governmentwide projects from Technology Transformation Services within the General Services Administration; and rapid hiring by the federal chief information security officer and U.S. Digital Service.

Biden’s transition team supports increasing TMF funding as a way of launching shared IT services across government and enhancing security in the aftermath of the devastating SolarWinds breach.

Billions in TMF funding have previously been cut from COVID relief bills. A $3 billion TMF appropriation was included in the House version of the first coronavirus relief package in March but ultimately left out, as was a $1 billion appropriation proposed by House Democrats in July for a subsequent relief bill. 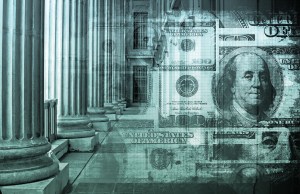