The CEO of big-data company Palantir has highlighted the benefits and dangers associated with its technology and said that lives have both been “saved and taken” as a result of its software.

In a letter to Shareholders dated February 14, Alex Karp noted that Silicon Valley companies selling data products to federal agencies face complex moral questions, and that there “are no goods or services or government today without software.”

“We understand that all technology, including ours, is dangerous, and that software can be used as a weapon,” Karp wrote.

The company has come under scrutiny for partnering with the government, especially under the Trump administration. Karp has routinely defended that work, saying that it is the duty of his company — and of all companies — to work with the U.S. government if they are to also deliver tech capabilities to adversaries.

Most recently, the company won a $116 million Army contract that extended a third year on its work with the Vantage data platform.

Despite the comment of the lethal applications of its tech, the company has been trying to branch out from the military and government space.

“Most of our customers are commercial, most of our revenue doesn’t come from intel and defense,” Karp said at the Reagan National Defense Conference in December.

The company’s latest financials show that in quarter three of 2021 a majority of revenue still came from government contracts. The government revenues have included health care work from agencies like the Department of Health and Human Services, despite higher growth in its commercial sector work, according to investor presentations.

The DOD has been focused on developing its own data platform, Advana. The platform was cited in memos from the deputy secretary of defense as the DOD’s senior leader go-to place for data curation.

She added all other data platforms need the sign-off from the CIO or chief data officer. 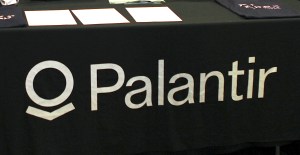