Some Army reservists will need to report to a branch facility to migrate their email to the service’s new Microsoft-based platform, an Army Reserve Command spokesman told FedScoop.

The majority of reservists, however, should be able to automatically switch their accounts without needing to access the Army Reserve Network either physically or virtually.

The command did not specify the exact breakdown of who will need to come to facilities, but some reserve soldiers have expressed confusion on how to migrate their accounts or if they will need to report to a facility to do so.

“The U.S. Army Reserve uses a variety of methods to provide information to Soldiers about the pending changes to their email platform,” John Bradley, deputy chief of media relations, told FedScoop in an email.

The reservists who will need to report to an Army facility to execute the change-over can do so at their next drill period, Bradley said. Some can also execute the migration by remotely accessing the Reserve Command’s Army Reserve Network (ARNET).

“A majority of Army Reserve Soldiers will not need to report to an Army Reserve facility to execute their email migration,” he said.

The migration is a broad change that will impact all members of the Army, including reservists and National Guard members. The Army is moving off of the Defense Information Systems Agency-operated Defense Enterprise Email system and on to Microsoft Office 365, which will give it access to collaboration tools such as One Drive and Teams. The system will be dubbed “A365,” with added security layers.

The Army purchased 200,000 fewer Microsoft Office 365 licenses than members of the Army, prompting fears that reservists or low-ranking soldiers might lose access to email. Army CIO Raj Iyer previously told FedScoop that the Army is working on an “alternative” solution to fill the gap and that everyone will have access to some form of email.

“Nobody to date has lost their email access,” Iyer said during a December media roundtable.

On top of this, the Army is working on a new “bring your own device” policy, and reservists and guard members will be the first to pilot it. The BYOD program should expand their access to remote tools without needing government-provided devices.

Iyer said the reservists and guard members deserved to have the first shot at using their own devices after a year of high rates of deployments. 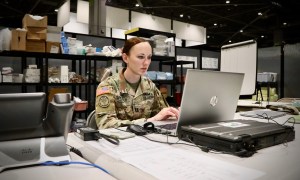