A trio of senior senators wrote appropriators in their chamber Thursday urging them to include at least $300 million in fiscal 2023 for the Technology Modernization Fund.

While the TMF saw a sizable deposit of $1 billion from the American Rescue Plan Act in 2021, more money is needed as the demand for support from the fund far outweighed that emergency injection, says the letter signed by Sens. Mark Warner, D-Va., Steve Daines, R-Mont., and Tom Tillis, R-N.C.

“While this served as a sizable investment towards these efforts, the demand for these funds was more than double their availability, and the Administration confirms that the TMF will allocate the majority of these funds by the end of this current fiscal year,” they wrote.

The Biden administration requested $300 million for the TMF in its budget proposal earlier this year, and the senators believe Congress should fund the program at that level, if not more, in 2023.

The letter continues: “By necessity, efforts to modernize and improve the security of IT systems require ongoing and sustained effort by agencies. Congress has a similar responsibility to continue to fund modernization efforts, so that legacy systems aren’t left to grow increasingly costly and insecure over time. The TMF presents agencies with a funding vehicle that is agile and allows them to amortize modernization costs, and that makes technical experts available to agencies throughout the proposal and implementation phases.”

Similarly, the TMF is advantageous for Congress in that it can serve as “a tool with additional accountability and oversight, in the form of board-review of proposals, incremental funding based on outcome-based milestones, and regular follow-up with funding recipients during funding implementation,” the letter says.

In years past, appropriators on the Senate side have been hesitant to fund the TMF at requested levels, often walking back what’s proposed by the White House.

The Biden administration has been bullish on the TMF, making it one of its central, cross-government IT modernization mechanisms.

As of March, the TMF had roughly $766.1 million left, and the board that doles that money out was being methodical about the projects that most needed it, said Federal CIO Clare Martorana.

“We have limited funding, so we have to invest in agencies that are committed to the framework of us building in an iterative manner,” Martorana said. “In showing us that they have the change management capabilities, that they’re willing to dig into the business process.” 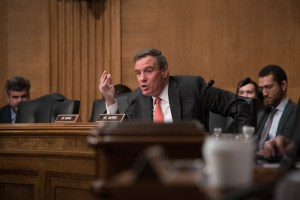