The chairman of the House Science, Space and Technology Committee says he will soon offer new legislation that would foster a collaborative framework for government, industry and academia to handle developments in quantum computing.

Lamar Smith, R-Texas, signaled his intent to introduce the National Quantum Initiative Act to help solidify the disparate sectors of quantum research into a national movement to capitalize on the nuanced potential of the emerging technology.

Hosting IBM officials Tuesday for a demonstration of the company’s 50-qubit quantum computer on Capitol Hill, Smith said in a release that the proposal would boost the U.S. at a time when countries are investing more in the technology.

“Quantum is poised to redefine the next generation of scientific breakthroughs. We must ensure that the United States does not fall behind other nations that are advancing quantum programs,” he said. “The National Quantum Initiative Act will accelerate quantum research and development. It will promote greater quantum research, standards, federal coordination and collaboration among the key quantum players — laboratories, industry and universities.”

The new bill will establish a National Quantum Coordination Office inside the White House’s Office of Science and Technology Policy to help coordinate research between agencies, serve as the federal point of contact and promote private commercialization of federal research breakthroughs.

The legislation also aims to encourage private sector companies to share their research with the federal government to help advance the technology; support standardization for the emerging technology; promote workforce initiatives; and establish national research centers within the Department of Energy, as well as quantum research and education centers within the National Science Foundation.

Quantum computers have drawn a lot of attention recently, mostly because their processors work with quantum bits, or qubits, that exist as both a one and a zero at the same time, potentially providing significantly more computing power than current technology and theoretically posing a threat to modern cryptography systems.

Smith’s bill has been anticipated recently, with Sen. Kamala Harris, D-Calif., introducing a bill last week that would direct the Department of Defense to form a Quantum Computing Research Consortium. That group would be overseen by a board that includes “members of National Quantum Initiative.” 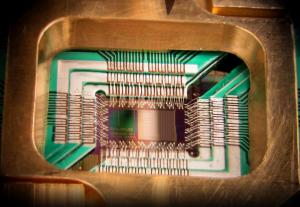