As military leaders try to secure global communications and space-based data, the Air Force Research Lab has turned to a Silicon Valley-based company to develop new cybersecurity architecture for satellites.

The new U.S. Space Force will work with Xage Security on prototyping a zero trust-style security system that is “rooted in tamperproof blockchain technology” to protect space systems in a new deal announced last week.

The Air Force and Space Force have recently been ramping up satellite protections, mainly through events like “Hack-A-Sat” and other bug bounty-type programs that enlist private researchers to disclose vulnerabilities. Xage told FedScoop its work will focus less on specific vulnerabilities and more on monitoring network activity to ensure a secure system.

“What Xage is doing is proving a much more fine-grained security solution,” Xage CEO Duncan Greatwood said in an interview. He added, “you can think of what Xage does as a means of blocking [attacks], it is very much zero trust architecture.”

A top concern for space leaders in the military is ensuring communications integrity and data protection. Everything from GPS to command and control systems relies on space operations, an arena that doesn’t yet have the cybersecurity maturity as those on the ground.

Greatwood said another critical part of the work Xage will be doing is preparing for “coordinating many different systems” in a secure way. With the number of satellites and other space systems growing, putting them under a common security architecture will be a challenge for the Space Force, he said.

“The connectivity environment is constantly changing,” he said.

Space Force will also have a large amount of data to work with. In April, the service inked a deal with the big data company Palantir to help use data from space. Now with Xage, it is working to secure that data and its integrity. Greatwood added that Xage will work on allowing “fine-grained access control” on data management to ensure its integrity. 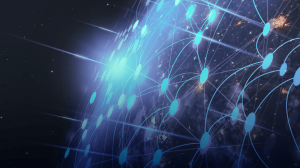