The U.S. military faces a variety of threats to its satellite systems, but the Space Force’s “soft underbelly” is cyber, a top official said Monday.

Cyberattacks could threaten on-orbit capabilities and the ground systems that support them, which are critical for intelligence, surveillance and reconnaissance (ISR), communications, and positioning, navigation and timing. Making U.S. systems secure is a top priority, noted Lt Gen. Stephen Whiting, head of Space Operations Command (SpOC).

“These global networks that we have in Space Force and SpOC are truly not only global — meaning they wrap around the globe — but then they extend out to 22,000 miles above the Earth’s surface into geosynchronous orbit. And that creates a lot of novel cyberattack surface … where bad actors might try to attack us in the cyber domain. So, we have to secure that because that’s our soft underbelly,” Whiting said during a Mitchell Institute event.

“That’s our first priority is to prepare those combat-ready, ISR-led, cybersecure space and combat support forces,” he added.

Advanced adversaries like Russia and China have tested anti-satellite (ASAT) missiles that could destroy U.S. spacecraft in orbit, “but they would prefer to take us on in cyber because it’s just a lower bar” to clear operationally, Whiting said.

Cyberattacks would also be a preferred method for less advanced adversaries such as North Korea because their other counter-space capabilities are lagging, he said.

The Defense Intelligence Agency (DIA) released a report last month on challenges to security in space. The study included cyber among a list of other threats to U.S. space systems such as ASAT missiles, directed energy weapons, electronic warfare and orbital systems.

“With sophisticated knowledge of satellite C2 [command and control] and data distribution networks, actors can use offensive cyberspace capabilities to enable a range of reversible to nonreversible effects against space systems, associated ground infrastructure, users, and the links connecting them,” the report said.

The PLA could launch cyberattacks against other nations’ space-based assets and other command, control, communications, computers, intelligence, surveillance, and reconnaissance (C4ISR) networks and commercial systems to establish “information dominance” in the early stages of a conflict, the report said.

China also uses cyberespionage to steal other countries’ space and counterspace technologies for its own benefit, according to DIA.

“Russia considers the information sphere, especially space-enabled information collection and transmission, to be strategically decisive and has taken steps to modernize its military’s information attack and defense organizations and capabilities,” the DIA report said.

It added: “Since at least 2010, the Russian military has placed a priority on the development of forces and capabilities, including cyberspace operations, for what it terms ‘information confrontation’ — a holistic concept for ensuring information superiority. The weaponization of information is a critical aspect of this strategy and is employed in times of peace, crisis, and war.” 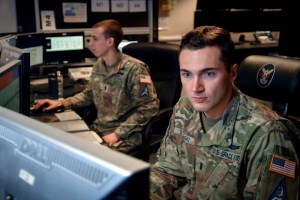