You’ve heard it before — the IT acquisition process is a bear.

It moves slowly, sometimes too slowly, and the barrage of bureaucratic hurdles can seem endless. So if you’re a small startup company with limited time and resources to devote to curating new clients, why even bother with the federal government?

A mixed panel of startup and government representatives tackled this question at NVIDIA’s GPU Technology Conference on Thursday.

Dawn Myerriecks, deputy director for science and technology at the CIA, proposed a very succinct answer to why startups do — and should — seek to work with the federal government: “we bring really good problem sets.”

The needs of the federal government and especially the intelligence community, Myerriecks went on to say, can be a good indication of things to come in the private sector. “That’s always a good thing for a startup to have — real problem that matters to get going.”

Later in the panel, John Kammerer, the technical director of high performance computing solutions at the National Security Agency, confirmed that this is also among the top reasons startups seek to work with his agency.

Looking at the issue from the lens of startups, James Crawford, CEO of Orbital Insight, offered a candid perspective on what makes working with the federal government a boon — a certain kind of legitimacy in private sector markets.

“There’s another really funny effect that we’ve discovered that we didn’t anticipate. And that is when you go to Washington and you say ‘we’ve been working with hedge funds, we have all these hedge funds as customers’ they go ‘wow those hedge fund guys, they’re really smart. You must have good stuff.’ And then you go back to New York, to Wall Street, and you say ‘Oh we’re working with five government agencies, we can’t tell you who they are but you would recognize their names if we told you’ and they say ‘wow, those intelligence guys in Washington, they’re really smart,'” Crawford imitated, to audience laughter. “So it actually helps with marketing in both markets.”

Not that the panel tried to belittle the challenges that come with federal contracting.

“Just getting in the conversation” can be difficult, Todd Mostak, CEO of MapD, said. “There always seemed to be a little bit of a wall,” he added, in the process of working with federal customers compared to working with private sector customers.

Crawford noted that while programs like In-Q-Tel (a representative of which was also on the panel) have made it easier for startups to get their foot in the federal door, there’s this “air gap” between In-Q-Tel-level investments and traditional procurement processes.

Still, the speakers broadly agreed that the government has only become more interested over time in working with small companies that have the edge on emerging technologies — a progression revealed by the creation of further government investment bodies like DIUx.

“I do think it’s getting a little easier,” Mostak said. “There’s definitely more of a lean in from the federal side.” 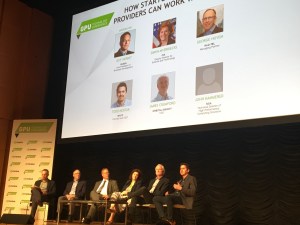 Working with the government can be slow and challenging. Why should startups even bother?