That time, in December 2017, when “an ambassador used a personal Twitter account to endorse the resumption of diplomatic ties between the European Union and the ambassador’s host nation”? Not cool, per the State Department’s inspector general. But despite finding a number of cases like this, a recently released IG report doesn’t put the blame entirely at the feet of the errant tweeters. The department’s policies on the matter, laid out in the Foreign Affairs Manual, aren’t super clear. The FAM specifies that State Department staff need to get approval before posting anything related to their professional duties on their personal timelines.

But what, exactly, is personal and what’s professional?

“The FAM defines official capacity as ‘pursuant to an employee’s employment responsibilities, or in any capacity representing the Department, regardless of location or forum,'” the IG report states. “The FAM defines personal capacity as ‘not pursuant to an employee’s official capacity.’ Both definitions lack specificity, and even [public affairs] officials with whom OIG met had difficulty in articulating the difference between them.”

The IG concludes that “the Department should ensure that its employees — ambassadorial and non-ambassadorial alike — understand how to properly manage their social media accounts” by setting clearer policies.

The report goes on to make three recommendations to this end. In response, the State Department says it has set up a Social Media Account Working Group “to clarify the Department’s guidance.” 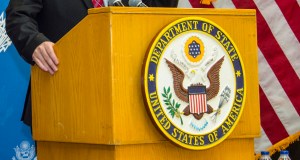