The Joint Artificial Intelligence Center is working on integrating data from the supply chain to better inform the military’s response to the coronavirus pandemic.

The data-crunching by JAIC is intended to help the National Guard and Northern Command understand where critical supplies are in short supply. The initiative, called Project Salus, aims to turn data from retailers and government data sets into operational information that military personnel responding to the crisis can use to have a better picture of the supply chain.

The JAIC essentially is hoping to take what used to be a low-tech process and overhaul it with the power of machine learning. During previous disaster response efforts, National Guard units would have to physically count the supplies of things like water bottles in stores, Nand Mulchandani, the chief technology officer for the JAIC told Roll Call, which first reported on the project. Northern Command did not return a request for comment.

Project Salus, which started in March, has shown the DOD is “moving at incredible pace, showing a significant amount of innovation,” Dana Deasy, the Department of Defense’s CIO, told reporters Monday. Deasy’s office oversees the JAIC.

Currently, the artificial intelligence center is working to bring AI and ML capabilities to initial prototypes that responders then give feedback about. The program is also undergoing legal review to ensure it complies with DOD policy and law, as it’s a new fast-moving project.

“The JAIC’s project team was able to move from concept to fielded prototype in just two weeks,” Abrahamson said.

The prototype is still under development, and Abrahamson added that JAIC officials anticipate NORTHCOM and the National Guard “will deploy these capabilities more widely after thoroughly assessing the prototype’s performance.”

Correction: Story has been updated to correct the spelling of Nand Mulchandani’s name. 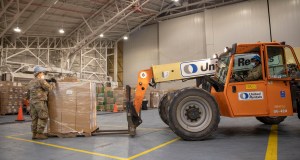