Even as President Donald Trump refuses to concede the election, big tech leaders are moving forward in laying out their policy agendas to President-elect Joe Biden.

The letter outlined specific policy proposals for the incoming administration, similar to a 2016 letter they sent to Trump.

“IBM is committed to working with your Administration to do its part,” it reads. “We share your vision of using science to control the virus, widening economic opportunities, achieving racial justice and combatting the climate crisis.”

The company’s top line suggestion is to use technology and science in the fight against COVID-19.

“It’s important to plan ahead, perhaps more now than ever given the crisis the country is facing,” Padilla said. “It’s very important for the good of the country to come together and unify and get on with the business of tackling the pandemic.”

The company advises establishing a Scientific Readiness Reserve in addition to a COVID-19 task force. This additional body would be composed of private-sector computing experts and scientists who the Biden administration could consult and even deputize into government service. Padilla said it could work similar to the U.S. Digital Service established under President Barack Obama, which hires top-level technologists on a term-limited basis.

“There’s no reason you couldn’t do something similar, particularly during crisis times,” Padilla said.

Krishna also suggested policies related to closing the digital skills gap in the federal workforce, modernizing the digital infrastructure, and building trust in emerging technologies. Many of the proposals in the letter could be achieved through executive order.

The letter was one of several congratulatory messages Biden received from tech companies and CEOs after his projected victory on Saturday, signaling an acceptance of the election’s outcome even as top Republicans dispute the results.

Microsoft President Brad Smith offered his congratulations in a Nov. 7 blog post, writing that there is an “opportunity to separate policies from politics so we can make a real difference in people’s lives.” Smith stressed that Americans have more similar interests than political pundits realize, especially when it comes to technology.

Cisco Chairman and CEO Chuck Robbins tweeted his congratulations, writing that the company looks “forward to working with [Biden] to strengthen the economy, recover from COVID-19 and unite our country.” Amazon CEO Jeff Bezos extended his well wishes in an Instagram post.

The Business Roundtable, an association group made up of CEOs from many sectors including technology, directly addressed Trump’s unsubstantiated claims of election fraud in its Nov. 7 statement.

“While we respect the Trump campaign’s right to seek recounts, to call for investigation of alleged voting irregularities where evidence exists and to exhaust legitimate legal remedies, there is no indication that any of these would change the outcome,” the statement reads.

IBM’s Padilla was serving in the International Trade Administration under President George W. Bush during what he describes as a “world-class” transition to Obama. Despite the current delays, he said he still hopes for a smooth transition to optimize the proposed tech policy initiatives.

“We need that here now,” he said. “We still have time, but the sooner the better.” 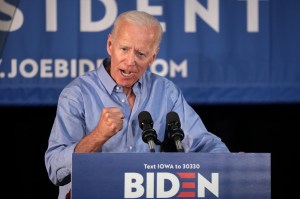