Rep. Will Hurd is confident the Technology Modernization Fund will receive appropriations close to the levels requested by House lawmakers earlier this year.

House appropriators wanted to give the TMF Board $150 million to award to federal modernization projects in fiscal 2019, as part of their version of the Interior, Environment, Financial Services and General Government Appropriations Act. The Senate side, however, zeroed the fund out in its bill, saying Congress needed more information on how the program is working.

But Hurd, R-Texas, says that when it does come time for the two chambers to work out the kinks in the remaining appropriations legislation, the House and Senate will agree to fund the TMF with “more of the House version reflected in the conference than the Senate version,” he told FedScoop. Appropriators are trying to finish the bill before Dec. 7, when a continuing resolution runs out.

“The reason that was zeroed out, the issue that caused that, has been resolved,” he said. “My friends at [the Office of Management and Budget] recognize the importance of oversharing to appropriators and making sure appropriators are aware of how they’re using the fund, and I think those issues have been ironed out.”

Hurd is more concerned, instead, with getting CFO Act agencies to stand up IT modernization working capital funds — which, along with the TMF, were authorized by his Modernizing Government Technology Act last year — and depositing money into them in fiscal 2019.

“My main focus — the meat and potatoes of MGT — are the working capital funds,” he told FedScoop. “That is the part that I am most concerned with and most focused on.”

Hurd said that funding one-off modernization projects like those that have received TMF money so far is “easy.” The working capital funds, however, have the chance to bring about lasting modernization change.

“And we know because we have examples of good modernization projects how that’s going to reform our digital infrastructure,” Hurd said. “But the long-term being able to create a culture of modernization is the most important thing MGT is going to be able to do. And so making sure that this fiscal year we have two or three agencies using and depositing money in their working capital funds —that to me, when that happens, that’s when I’m going to feel comfortable that this is going to be a success and something that’s going to have long-term impacts.”

By law, agencies weren’t allowed to begin depositing into those funds until fiscal 2019, Hurd said. “Many agencies have created working capital funds, many agencies have plans to create those funds, and of course CFOs and procurement officers are trying to push back on federal CIOs who are trying to resolve some of that bureaucratic inertia to ensure that CIOs have a working capital fund as designed by the legislation.”

Hurd has included the working capital fund as a metric on his biannual Federal IT Acquisition Reform Act Scorecard, which he says has evolved into more of a “digital hygiene scorecard” than focusing solely on FITARA. He plans to release another such review of federal agencies’ IT later this year.

In the early going of the TMF, Hurd said, “I think everybody has come to a realization that appropriators should be given greater transparency than less — and I think that’s what’s going to help to resolve the issue in the conference committee.”

That includes “making sure that appropriators know how you’re evaluating the projects [and] which projects are you leaning toward funding,” he said. “They’re the ones that provide the money and they should have access. These aren’t state secrets. And so I think that was a frustration that they weren’t getting insights into decision-making the way they thought they should.”

But it’s a two-way street. Hurd also said, “I think my appropriator friends need to figure what is their criteria of success up front so everybody’s aware into how are they going to decide whether a TMF-funded project is worth it or not.”

“And it may not always be that it saves you money,” he said.

It also has to do with trust in the TMF Board, because modernization projects like those funded under the TMF program aren’t easily evaluated in such a quick turnaround.

And of course, with more time before the CR runs out, it will give the TMF Board, led by Federal CIO Suzette Kent, an even greater opportunity to share data and early lessons learned with Congress. The board issued a total of $45 million to modernization projects at the departments of Agriculture, Energy and Housing and Urban Development in its first round of awards. That leaves $55 million to award of the $100 million appropriated in an omnibus bill earlier this year. 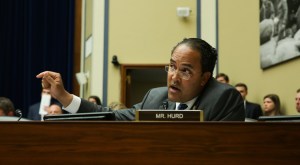 Confident TMF will be funded in 2019, Will Hurd is focusing now on agency working capital funds