The Army is taking a new approach with its latest major tech-focused acquisition: There are no requirements, just “characteristics of needs,” one of the generals running the program said Friday.

The Army published the final request for proposals for the Optionally Manned Fighting Vehicle (OMFV) last week in a completely unclassified manner to allow non-traditional companies and foreign firms to submit bids over the next four months for what will eventually replace the well-known Bradley Fighting Vehicle. The idea is to be as open as possible with companies, proposing no requirements to give them as much “latitude” as possible to innovate to solve the service’s problems.

It’s an approach technology acquisition reform advocates have been suggesting for years.

“We are not going to put a nail in a single requirement until we have to,” Brig. Gen. Richard Coffman, director of the Army Futures Command‘s Next-Generation Combat Vehicle Cross-Functional Team, said Friday during a virtual news conference. “That allows the industry to continue to innovate.”

The Army is looking for innovative ideas throughout the build of the next-generation vehicle — from the materials used in the vehicles to the IT driving autonomous capabilities. The contract has nine total “characteristics of needs,” and the Army will judge bidders on how well they meet them.

Despite having “no requirements,” the vehicle will need to link into the Army’s new Modular Open System Architecture (MOSA) that future combat vehicles will use for software updates.

The Army anticipates the next vehicle it eventually selects — which would likely be after prototyping in 2023 — to have a life similar to that of the Bradley, the enduring troop-carrier that the Army has been using and upgrading for decades.

“This vehicle will be in our Army for a very long time, we have to have the ability to continually upgrade,” Coffman said.

Coffman and Brig. Gen. Glenn Dean, the  program executive officer for Ground Combat Systems (PEO-GCS), repeated the analogy that the vehicle be like an iPhone with an app store that has a common software architecture that can allow for new capabilities to be designed and pushed through code instead of constantly getting a new phone.

“You are seeing that with your cell phones today … that is the speed that we need to move in the future,” Dean told reporters.

The technical needs for the new vehicle are emblematic of the largest military branch’s shift to being a technology- and data-focused force. Top generals and civilians have long said they want to bring technology modernization to every aspect of warfighting, with this latest contract being a major example of that shift. 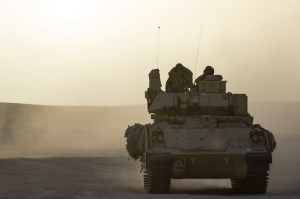