The Office of the Director for National Intelligence is actively recruiting to bring on a “titan” of the tech industry to be the next CIO of the intelligence community, the IC’s current acting CIO told FedScoop.

The office is set to issue a job listing soon to bring on a permanent CIO, said Michael Waschull, the IC deputy CIO who’s been acting CIO since January. Waschull said Director of National Intelligence Avril Haines is looking for a “visionary” IT leader who can take the IC’s technology and information environment “to the next level.”

The IC CIO role is charged with coordinating and integrating IT elements across the intelligence agencies and reports directly to the director of national intelligence.

Whoever comes into the role has the major building blocks in place to do great things, Waschull said, pointing to the intelligence community’s landmark Commercial Cloud Enterprise (C2E) contract and its recent work optimizing networks for connectivity home and abroad.

“What we’re excited about here is the fact that we have set the table, we’ve got all of these capabilities now in place, the building blocks are there,” he said. “And we are seeking a world-class IC CIO from industry with demonstrated knowledge, skills, expertise and experience in setting a vision to take us to the whole next level, frankly. We’re looking for somebody to help us boldly go where the IC has not gone before.”

Upon the hire of a new CIO, Waschull would return to his deputy CIO role. And he’s “proud” to do that going forward “to enable that person to create that vision and to execute that plan of attack that program of work to take us to that next level,” he said.

Waschull took over the acting role when previous IC CIO Matthew Kozma stepped down. Before Kozma, John Sherman was the IC CIO for several years until he was recruited to be deputy CIO of the Department of Defense, where he’s now acting CIO. 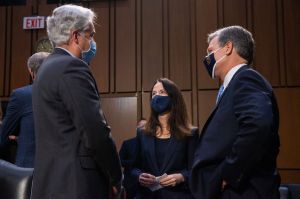