U.S. Chief Data Scientist Denice Ross remembers the killing of 18-year-old Michael Brown by Ferguson, Missouri police as a galvanizing moment for federal officials in their approach to open data.

At the time of the young man’s death in 2014, police departments did not release use of force data — basic information needed by federal officials to determine how Black communities were being affected by law enforcement violence — and led her to spearhead the novel Police Data Initiative.

The effort started with 14 police departments committing to opening at least three datasets — their use of force dataset almost always being one — and 129 jurisdictions were on board by the end of the Obama administration. Police and citizen expectations of what transparency and accountability should look like, and what data should be open, had changed, Ross told FedScoop in an exclusive interview.

“But we didn’t create a mechanism for turning that data into action, so that’s why I’m back.” Ross said. “Because open data is necessary and not sufficient to drive the type of action that we need to create a more equitable society.”

Ross was a Presidential Innovation Fellow at the time.

Now the U.S. chief data scientist since November, Ross’ focus has been ensuring the data agencies are using and publishing are yielding more equitable outcomes for Americans. And that requires the “next generation of open data” as she sees it: disaggregated data.

President Biden stressed his commitment to equitable data from his first day in office with the immediate issuance of the Racial Equity Executive Order in support of underserved communities. When the White House’s Equitable Data Working Group (EDWG), created by the order, released its five recommendations in April for improving use, normalizing disaggregated data while protecting privacy topped the list.

“Now everybody is talking about disaggregating data,” Ross said. “It used to be — I’ve been in this field for 20 years — I always avoided that word because it was so jargoney, and nobody knew what we were talking about.”

Still agencies are a “mixed bag” when it comes to collecting disaggregated data and using it properly, she added.

The chief data scientist has spent the last 10 months building a small team within the White House Office of Science and Technology Policy that supports the Biden administration’s biggest priorities like the Bipartisan Infrastructure Law (BIL) with $1.2 billion behind it, Inflation Reduction Act and Customer Experience Executive Order reducing barriers to government benefits. For the first time, a dedicated team is applying disaggregated data to a president’s policy agenda.

“What I do is infuse equitable data into those priorities, so data isn’t a side thing,” Ross said. “It’s actually integrated into how we design programs and policies.”

For that reason it’s important the team be a diverse mix of genders, races, ethnicities and lived experiences, she added.

Ross finds the biggest obstacle to the team’s work is its hybrid nature; there aren’t as many in-person interagency meetings or civic tech innovation summits for sharing best practices since the pandemic began.

“The collaboration tools that we have are just mostly not compatible,” Ross said. “And so we end up making the most of what we can with a PowerPoint and a Zoom call, but that’s a far cry from being in the same room with a bunch of post-it notes and really doing some solid design thinking using the best available tools.”

Ross assists with the hiring of data practitioners within agencies like the Office of Personnel Management’s surge team for the White House’s BIL implementation, which requires hundreds of STEM-trained personnel to support investments.

The chief data scientist’s team is responsible for operationalizing some of the recommendations of the White House Equitable Data Working Group (EDWG), which is transitioning into the National Science and Technology Council’s Subcommittee on Equitable Data. Ross will co-chair that subcommittee.

In addition to disaggregating data, the team is uncovering underused data; improving agencies’ capacity for policy and program equity assessments; creating public data visualization tools; and soliciting feedback from state, local, tribal and territorial communities. Some communities surpass the federal government when it comes to disaggregating data, which is why OSTP recently issued requests for information (RFIs) on LGBTQI+ equity and equitable data engagement and accountability on behalf of the new subcommittee.

“We’re really serious about these RFIs because we need the wisdom from the field in order to be able to implement these Equitable Data Working Group recommendations, in the most useful way, inside the federal government,” Ross said.

Other EDWG recommendations fall to the Office of Management and Budget and U.S. Chief Statistician Karin Orvis, who’s currently modernizing the 25-year-old Statistical Policy Directive No. 15 (SPD 15) on race and ethnicity data standards.

OMB recently released a plain-language recommendation to agencies for making the best use of existing race and ethnicity standards because the revised guidance isn’t expected until summer 2024. The recommendation includes practical flexibilities for disaggregating race and ethnicity data, approaches to data on more than one race, and advice on adding additional race categories to forms or surveys.

“I’ll just spoil that one,” Ross said. “You should not add some other race category to your forms or surveys because then it makes your data really unusable.”

OMB’s first listening session on the SPD 15 revision is slated for Sept. 15, 2022, and an RFI will be issued soon, Ross said.

The chief data scientist expects the update will have a ripple effect on how SLTT governments collect their own data with California already considering new race categories.

Ross will spend the rest of the year helping stand up the Working Group on Criminal Justice Statistics called for in May’s Policing and Criminal Justice Executive Order, harkening back to her work as a PIF, and ensuring her subcommittee hits the ground running.

“My priority for the rest of 2022 is to get these interagency collaborations going through the Subcommittee on Equitable Data,” Ross said. “That includes working on sexual orientation and gender identity data, infrastructure investment and equity assessments.” 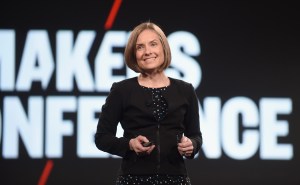