The U.S. Air Force opened a new cybersecurity center to try to mitigate well-documented vulnerabilities in systems aboard its fighters and bombers.

The new $1.5 million office within the Air Force Life Cycle Management Center’s Fighters and Bombers Directorate comes as audits from the Government Accountability Office and inspectors general have found major cybersecurity flaws in weapons systems that potentially leave them at risk of takeovers by adversaries.

The new program, located at the Wright-Patterson Air Force Base in Ohio, will function as a hub for partnerships across sectors and work to reduce communication barriers in achieving cyber-resilience, according to the Air Force.

In one 2018 report on developing weapons systems, the GAO found adversaries could easily take control of some systems while remaining undetected. A DOD IG report later found basic cybersecurity steps remained overlooked, such as multi-factor authentication and mitigating known risks in networks.

“DOD’s own tests show they could be pretty easily hacked,” Cristina Chaplain, one of the authors of the GAO report said in a GAO podcast.

The Air Force has another office dedicated to handling digital security within weapons systems, the Cyber Resiliency Office for Weapons Systems, also known as CROWS. A partnership between CROWS and the fighter and bomber directorate created the new facility, the Air Force said.

“Construction of this facility is a key component of the CROWS mission to increase the cyber resiliency of Air Force weapon systems and maintain mission effective capability,” Joseph Bradley, CROWS director, said. “It will improve communication, collaboration and allow us to better resolve problems.”

CROWS hopes to establish more facilities to reduce cyber vulnerabilities in weapons systems, like this one with the fighters and bombers directorate. 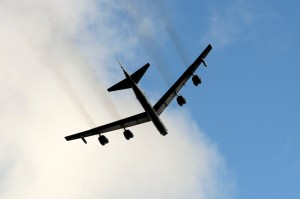