Federal agencies stand to gain significant savings and performance benefits with a new generation of microprocessors that will allow one server to do the job of five in a typical federal data center, according to a new report.

Those savings and performance improvements represent a substantial opportunity for the federal government, which continues to rely on thousands of data centers for sensitive workloads that can’t readily be moved to the cloud. 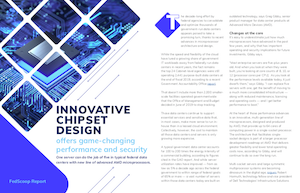 The top 24 Cabinet-level agencies alone were still operating 2,441 purpose-built data centers at the end of fiscal 2019, according to a Government Accountability Office report. And there are there at least 2,000 smaller-scale facilities operated governmentwide that the Office of Management and Budget decided in June 2019 to stop tracking.

The cost of operating and maintaining these data centers continues to grow more costly, however. A vast number of servers within those data centers today are built on outdated technology, says the report produced by FedScoop and underwritten by Dell and AMD.

“With most servers being deployed for five-plus years — if you think about buying a new architecture that does not have this capability, that is a long time not to reap the benefits of AMD’s security features, so think about enabling your hardware ecosystem now,” Gibby says.

Agency leaders should look at the performance levels on their servers, Gibby says, because they “can replace five servers with one, get the benefits of moving a much more consolidated infrastructure — along with reduced maintenance, licensing and operating costs — and get better performance to boot.”

At the heart of those performance advances is an innovative, multi-generation line of microprocessors, designed and produced by AMD, that provide up to 64 cores of computing power in a single-socket processor. The architecture that facilitates single-socket designs is part of a larger processor development roadmap at AMD that delivers greater flexibility and lower total operating costs immediately, according to Gibby, and will continue to do so over the long run.

The benefit of single-socket servers is they eliminate bottlenecks that occur when multiple processor cores share memory, input-output bandwidth and other resources between sockets.

Gibby says that is why every major cloud service provider — including AWS, Microsoft Azure, Google Cloud and VMware — has invested in AMD as part of their current portfolio.

According Rick Indyke, who manages AMD’s public sector business development, federal agencies that are looking to refresh and optimize their server fleets can now capitalize on the same long-term operating advantages AMD’s processor are delivering to the big cloud providers.

“By improving the density, you begin to deliver greater virtual machine counts and reduce the total cost of ownership,” he says, “and reduce the support and maintenance services required, because you’re taking care of fewer machines.”

The report highlights AMD’s partnership with Dell Technologies, which allows customers to take advantage of Dell’s proven supply chain experience in delivering certified servers and engineering support to federal agencies provides even greater assurance to agencies who want to upgrade to the new AMD chip.

That partnership has led to deep engineering engagements over the past few years and resulted in Dell bringing a full portfolio of AMD-based PowerEdge server platforms — including several single socket servers — to the federal market.

Read more about AMD’s microprocessor innovations and how to take advantage of Dell Technologies latest line of high-performance servers.

This article was produced by FedScoop and sponsored by Dell and AMD. 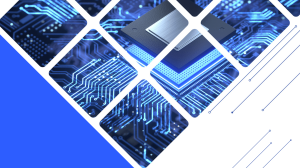