Lawmakers on the Hill sees a gap in the government’s artificial intelligence strategy, so they’re filling in.

Reps. Will Hurd, R-Texas, and Robin Kelly, D-Ill., published a workforce AI white paper that calls for the rethinking of American education and workforce development in order for the U.S. to keep pace in the global race for AI dominance. The lawmakers worked with the Bipartisan Policy Center to release the paper, which is the first in a series of four. Congressional staff told FedScoop the lawmakers’ work is not necessarily in reaction to the White House’s but meant to be “complimentary.”

The white paper was a year in the making after Hurd and Kelly announced their bipartisan collaboration on AI policy to make up for the Trump administration’s “woefully underprepared” approach to support American AI development, as Kelly put it.

The White House has issued AI-related executive orders. But some, like Kelly, have been critical of the administration’s stance on the emerging technology, saying it lacks a cohesive strategy on how the U.S. will compete in the AI economy.

The crux of the workforce white paper is to educate early and educate often while increasing access to technology jobs in both federal agencies and the private sector.

One key barrier some technical workers have experienced is the requirements for traditional higher education degrees when on-the-job experience or self-paced online learning will suffice. The white paper recommends government agencies “review their hiring practices to ensure they are not inadvertently disqualifying people with AI skills that have a less traditional background.”

“The United States should embrace and take a leadership role in the AI driven economy by filling the AI talent gap and preparing the rest of the workforce for the jobs of the future,” the white paper states. “However, in doing so, policymakers should make inclusivity and equal opportunity a priority.”

Closing the talent gap requires increasing funding to technology education programs and creating new ones “where gaps exist,” the paper says. Congress should create new grants programs experimenting with increasing workforce diversity recruitment and retention in the private sector and have federal agencies review their own policies, it recommends.

A job not just for coders

The report also says the AI workforce should not just be made up of technology and STEM-focused workers. Humanities and liberal arts-trained workers are also needed and should be able to flourish in the AI economy by finding ways to work with the implementation and creative pairing of human skillsets with AI, the report states.

“Many skills that will be in demand in the future will have little or nothing to do with computer science, but instead focus on the distinct human skills such as creative and social intelligence that often complement AI systems,” the report states.

Policymakers should take a “holistic approach” to workforce development on AI, the report recommends.

To prepare both STEM and liberal arts workers for a job market driven by AI expertise, the report says that life-long education will be critical. Congressional staff told FedScoop this is one of the report’s key elements.

“The United States needs a conceptual restructuring of education as a lifelong process that occurs after high school graduation through mid-career,” the report states.

The staff said in an email “many of the concepts discussed in this paper have been discussed in some form or format, however, the value is in bringing them together. Two concepts that are important to highlight are the conceptual restructuring of education as a life-long process that occurs after high school graduation through mid-career and the notion of teaching computer science and data science at a much earlier age.”

Non-traditional education platforms like online schools are part of this, the white paper states. It recommends the federal government take a skills-based approach to talent and hiring. The government should also expand its definition of educational programs that it funds to support non-traditional learning.

“All workers, regardless of the industry, need to regularly update their skills as the constant development of new technologies and processes results in new methods of production and operation,” the paper goes on to state. 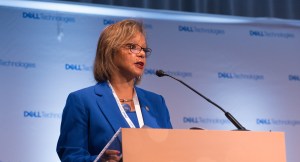